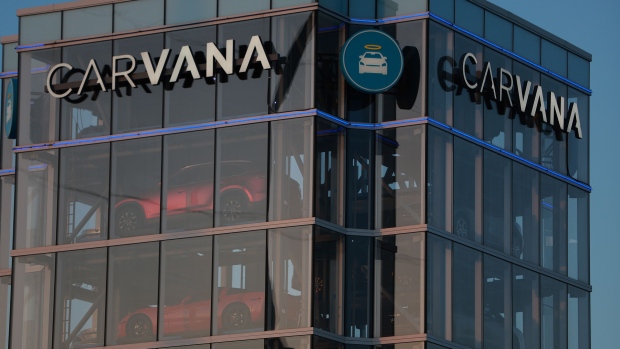 MIAMI, FLORIDA - MAY 11: A Carvana used car "vending machine" on May 11, 2022 in Miami, Florida. Carvana Co. announced it is letting go about 2,500 workers, a few weeks after the company posted a $506 million loss in the first quarter. (Photo by Joe Raedle/Getty Images) , Photographer: Joe Raedle/Getty Images North America

(Bloomberg) -- Some of Carvana Co.’s largest creditors including Apollo Global Management Inc. and Pacific Investment Management Co. have signed a pact that binds them to act together in negotiations with the company, a move meant to prevent the kind of nasty creditor fights that have complicated other debt restructurings in recent years.

A group of funds holding around $4 billion of Carvana’s unsecured debt, or around 70% of the total outstanding, have signed the cooperation agreement, which will last a minimum of three months, according to people with knowledge of the matter who asked not to be named because they were not authorized to speak publicly.

The agreement aims to prevent the kind of splintering among lenders that troubled companies such as Envision Healthcare Corp. have used in recent years to secure more favorable terms in complex debt deals. Such infighting is partly an outcome of an era of easy money that’s weakened lender protections and left creditors with few options but to turn against each other for a better spot in the repayment line.

BlackRock Inc., Ares Management Corp. and Knighthead Capital Management are also part of the group, which is being advised by White & Case LLP and PJT Partners Inc. and includes fewer than ten lenders in total, according to one of the people.

Representatives for each of the lenders and Carvana didn’t immediately comment.

The aim of the group is to present a united front in negotiations around new financing or a debt restructuring for Carvana, a one-time hedge fund darling that has seen its stock plunge 97% this year because of investor concerns over its long-term prospects.

The company’s bonds have been languishing below 50 cents on the dollar, indicating that investors believe the company is at a high probability of default. Bonds held by the group will trade separately from those held by the non-participating creditors and any new buyers will be bound by the terms of the cooperation agreement, one of the people said.

Also read: KKR’s Debt Deal Shows How Ugly Things Are Getting for Lenders

Carvana’s credit outlook has deteriorated due to declining prices for used cars, rising interest rates and a heavy debt load. The company has cut thousands of jobs this year in an effort to slash costs and slow its cash bleed.

(Adds details about creditor fights and Carvana’s oulook from the third paragraph.)