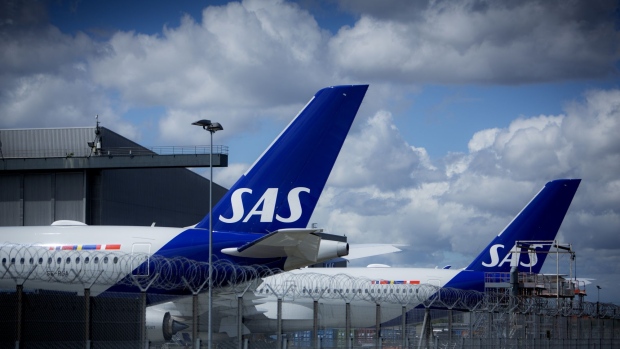 Passenger aircraft, operated by SAS AB, on the tarmac at Copenhagen Airport in Copenhagen, Denmark, on Tuesday, July 5, 2022. Scandinavian airline SAS AB filed for Chapter 11 to tackle its debt burden as the recovery from the disruption caused by the coronavirus pandemic has been slower than expected. , Bloomberg

SAS is struggling with a crippling debt burden that mounted during Covid-19 lockdowns and is threatening the future of the tri-national airline. With the loan, Apollo will probably end up as one of SAS’s main shareholders after the $3 billion restructuring is completed, analysts at Sydbank estimate.

SAS said over the weekend it expects to get court approval for the financing by the middle of September. The debtor-in-possession loan from Apollo, which has a track record of backing aviation companies, will enable the Scandinavian airline to continue meeting its obligations throughout its Chapter 11 bankruptcy process.

“Apollo now looks like a new major shareholder in SAS,” Jacob Pedersen, head of equity research at Sydbank, said in a note on Monday. “It’s highly likely that Apollo and the Danish state together will end up with more than 50% of the shares -- and thereby in partnership control SAS.”

The Danish state has pledged to convert a loan to shares and targets a stake in SAS of 22% to 30% after the reconstruction. Apollo may get a stake of at least 30% because its loan comes with a fee for SAS if the equity firm doesn’t obtain such a holding, said Pedersen who has a sell rating on the stock.

SAS shares rose as much as 18% in Stockholm and advanced 10% as of 9:47 a.m. local, time. The gain pared this year’s stock market loss to 40%. Still, the shares are likely to fall back again, according to Sydbank’s Pedersen.

“The reality is still that any value for existing shareholders is gone and that they are facing an extreme dilution when the capital increase is conducted,” the analyst said.

SAS filed for bankruptcy protection in the US on July 5, and said earlier this month it expected the process to conclude within nine to 12 months. In July, it was hit by a 15-day pilot strike which cost the airline as much as $12.5 million a day.