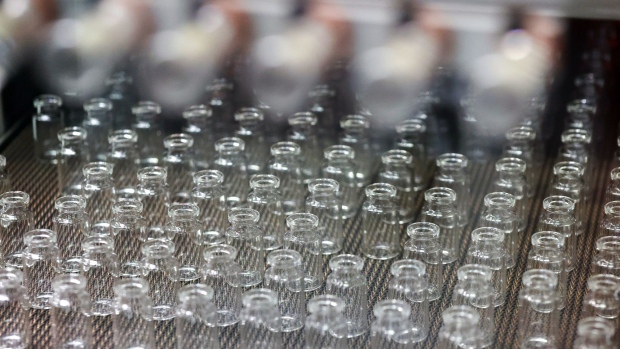 Glass vials move along a production line conveyor at the Gerresheimer AG medical glassware factory in Buende, Germany, on Tuesday, Aug. 11, 2020. Gerresheimer has built up capacity and most of its factories are operating around the clock as the company holds talks with pharma companies, working on a coronavirus vaccine. Photographer: Alex Kraus/Bloomberg , Bloomberg

A drug company backed by Apollo Global Management Inc. is in advanced discussions to acquire Amag Pharmaceutical Inc., according to people familiar with the matter. The shares rose more than 40 per cent in late trading.

The private equity firm’s Covis Pharma could announce an agreement within days, said the people, who asked to not be identified because the matter isn’t public. Talks are ongoing and the deal could still fall apart, they added.

Representatives for Apollo and Covis declined to comment. A representative for Amag didn’t respond to requests for comment.

Amag closed up 1.4 per cent to US$9.40 at in New York on Wednesday, giving the company a market value of about US$324 million.

The Waltham, Massachusetts-based company has been under pressure to improve its performance from activist investor Caligan Partners. The parties reached a settlement last October.

Since that agreement was struck, the company appointed Scott Myers as chief executive officer. Amag has also trimmed more than US$100 million in expenses, sold a women’s health businesses, and terminated a licensing agreement for the women’s libido drug Vyleesi in recent months.