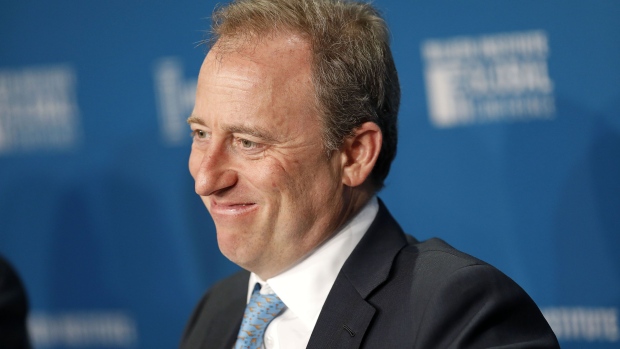 Joshua Harris, co-founder of Apollo Global Management LLC, reacts during the Milken Institute Global Conference in Beverly Hills, California, U.S., on Monday, May 1, 2017. The conference is a unique setting that convenes individuals with the capital, power and influence to move the world forward meet face-to-face with those whose expertise and creativity are reinventing industry, philanthropy and media. , Bloomberg

The comment, in response to an analyst’s question, came four days after Bloomberg reported that Harris is being sidelined and has relinquished day-to-day handling of operations.

“What is external is mostly noise for us,” said Rowan, who was picked over Harris to succeed Leon Black as CEO. “We get up for business every day and we execute the plan.”

Rowan noted that Apollo has a deep bench of management talent.

The past year has been a tumultuous one for Apollo. Black’s financial ties with sex offender Jeffrey Epstein threatened fundraising as some investors put their commitments on hold. The episode precipitated Black’s departure from the firm earlier this year.

Harris, 56, had positioned himself as Black’s most likely successor, frequently representing Apollo at conferences and in the media. He was seen as having a tighter relationship with Black and deemed the top contender for the role.

But Black, 69, surprised insiders in January by handing the top job to Rowan, after Harris privately urged Black to give up his posts to avoid further damaging Apollo’s reputation. After the decision was made, Harris publicly supported it.