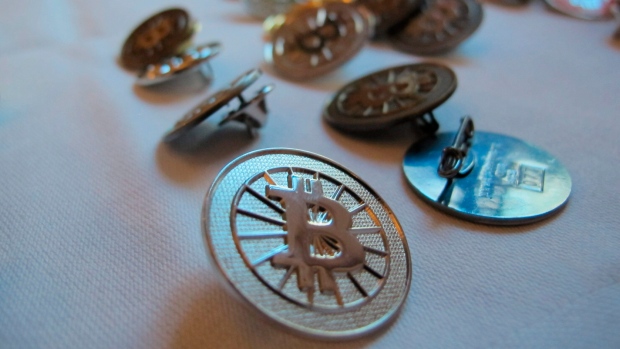 In this Feb. 12, 2014 file photo Bitcoin buttons are displayed on a table at the Inside Bitcoins conference in Berlin. , The Canadian Press

The push to integrate cryptocurrencies into global commerce looks a step closer to reality.

Intercontinental Exchange Inc. said Monday that it will begin testing its consumer app for digital assets with its partner Starbucks Inc. in the first half of 2020. That follows a jump in Bitcoin futures on the exchange to a record.

A total 1,179 monthly Bitcoin futures changed hands on Oct. 25, according to the company. None of the daily contracts traded. The ICE contracts differ from other Bitcoin derivatives because they deliver actual Bitcoin if held to expiration, unlike cash-settled contracts at competitor CME Group Inc.

“We’ve assembled a strong team of payments engineers and are nearing completion of our core payments and compliance platform,” Mike Blandina, chief product officer at ICE’s Bakkt unit, said in a blog post. “We’re now focused on the development of the consumer app and merchant portal, as well as testing with our first launch partner, Starbucks, which we expect in the first half of next year.”

The beverage retailer teamed up with ICE and several other partners in August 2018 to create the Bakkt venture.