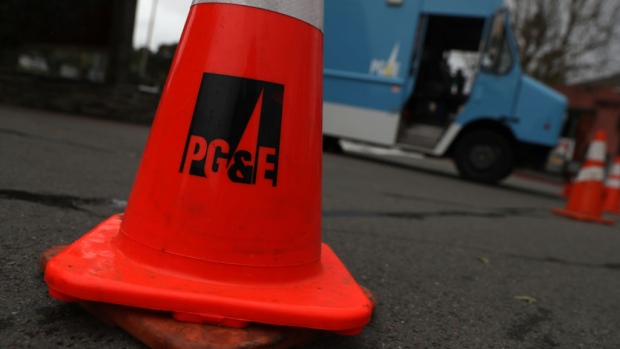 FAIRFAX, CALIFORNIA - JANUARY 17: A traffic cone sits next to a Pacific Gas & Electric (PG&E) truck on January 17, 2019 in Fairfax, California. PG&E announced that they are preparing to file for bankruptcy at the end of January as they face an estimated $30 billion in legal claims for electrical equipment that might have been responsible for igniting destructive wildfires in California. (Photo by Justin Sullivan/Getty Images) , Photographer: Justin Sullivan/Getty Images North America

The firms disclosed their holdings on the same day California investigators said that equipment owned by PG&E caused the deadliest wildfire in state history.

To contact the reporters on this story: Brian Eckhouse in New York at beckhouse@bloomberg.net;Miles Weiss in Washington at mweiss@bloomberg.net