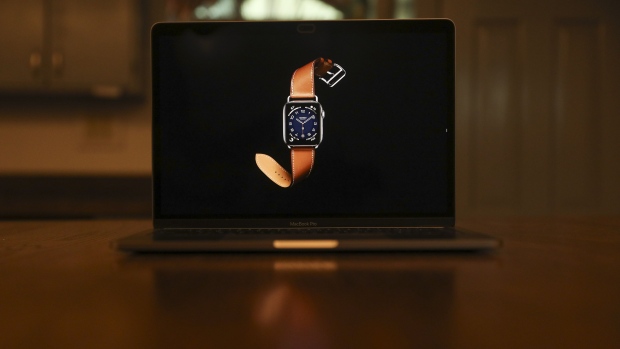 The Apple Watch Hermes Series 6 is seen on a laptop computer during a virtual product launch in Tiskilwa, Illinois, U.S., on Tuesday, Sept. 15, 2020. Apple Inc. kicks off a broad slate of new products, with upgrades to two of its most important hardware lines beyond the iPhone. Photographer: Daniel Acker/Bloomberg , Bloomberg

Apple Inc. is trying to delay a legal fight over allegedly stolen blood-oxygen monitoring technology in its latest watch so it can gain a more dominant share of the smartwatch market, medical-sensor maker Masimo Corp. said in a court filing late Monday.

Blood-oxygen monitoring is a key feature of the latest Apple Watch Series 6 announced on Sept. 15. Masimo and its spinoff Cercacor Laboratories Inc. had sued in January, accusing Apple of promising a working relationship only to steal secret information and hire away key employees, including Cercacor’s former chief technology officer and Masimo’s chief medical officer.

Cupertino, California-based Apple hasn’t formally responded to the allegations. Instead, it has filed requests to dismiss the trade-secret part of the case and earlier this month lodged petitions to have Masimo patents invalidated at the U.S. Patent and Trademark Office. Apple wants the trial court in Santa Ana, California, to keep the civil suit on hold until those issues are resolved.

Postponing the case “would allow Apple to seize on a critical window of opportunity to capture an emerging field,” Masimo said in the filing Monday. “Just as it has done in numerous other markets, Apple seeks to use its considerable resources and ecosystem to capture the market without regard” to Masimo’s patents, the sensor-maker said.

Irvine, California-based Masimo said it sells a variety of monitors and fears Apple will use its power to stifle competition.

“I have seen reports from consumers and others suggesting that the Series 6 be used as a medical product,” Masimo Chief Executive Joe Kiani said in the filing. “Not only will that harm consumers themselves, it will also reduce our opportunities to sell truly clinical-grade products to consumers.”

Masimo claims Apple deflected earlier requests for information on whether the Watch Series 6 would have blood oxygen monitors. Apple dismissed speculation about the feature as “Internet rumors” and claimed the two sides weren’t in competition, Masimo said.Officials with Apple didn’t immediately respond to requests for comment.

Apple on Sept. 15 said delaying the patent aspect of the case while a review board considers its invalidity arguments might help narrow the issues for the court and “will undoubtedly reduce wasted resources.”

District Judge James Selna has set a series of dates that would mean the first hearing on how to interpret key terms of the patents will be held in April, unless he puts the case on hold before then.