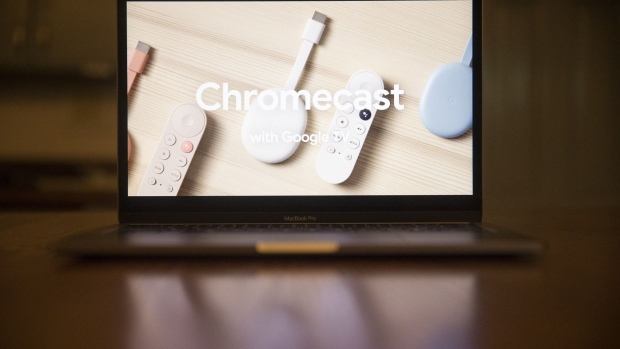 The Chromecast TV devices are unveiled during the Google Launch Night In virtual event. , Bloomberg

The move adds another point of sale for the iPhone maker’s US$4.99 per month subscription service and another place for people to stream movies and shows purchased through iTunes. The Chromecast version of the app will also support Apple TV Channels, a feature that lets users subscribe to third-party streaming services, including HBO and Starz, within the TV app, which gives Apple a cut of the fee.

Alphabet Inc.’s Google also said Wednesday in a blog post that the Apple TV app would be coming to more TV sets running Android. Some televisions made by Sony Corp. with an Android operating system already support the Apple TV app.

The extension of Apple TV+ to the new Chromecast and more Android TVs continues Apple’s approach of putting the video streaming service on as many third-party devices as possible. It already is available on boxes from Amazon.com Inc. and Roku Inc. in addition to Sony’s PlayStation 5 and Microsoft Corp.’s new Xbox. However, the streaming app isn’t available on smartphones and tablets running Google’s Android. Earlier this month, Apple Music was added to Google smart speakers.

The wider availability of Apple’s music and video apps is key to expanding a services portfolio that topped US$50 billion in annual sales in fiscal year 2020 and now makes up almost 20 per cent of the Cupertino, California-based company’s total revenue.