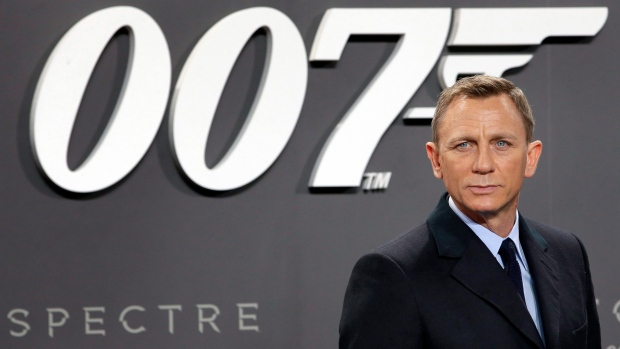 In this Oct. 28, 2015, file photo, actor Daniel Craig poses for the media as he arrives for the German premiere of the James Bond movie 'Spectre' in Berlin , The Canadian Press

Apple Inc and Amazon.com Inc have joined a bevy of suitors bidding for distribution rights for the lucrative movies depicting the exploits of Britain's most famous fictional spy: 'Bond. James Bond."

Amazon and Apple are willing to pay about the same amount for the rights as Warner Bros, the magazine said, citing anonymous sources. It did not give a figure. The Bond franchise is worth between US$2 billion and US$5 billion, an industry insider, speaking on condition of anonymity, told the Hollywood Reporter. Apple and Amazon were not immediately available for comment. Sony previously owned the distribution rights, but they expired with the 2015 release of the latest Bond film, "Spectre." That movie took in about US$880 million at the global box office, according to film tracker BoxOfficeMojo.com.

James Bond, created by British author Ian Fleming, first burst onto the silver screen in 1962 in the hit "Dr. No," starring Sean Connery as the British secret agent. A plethora of Bond films followed, starring Connery and several actors who succeeded him in the role, including Roger Moore and Pierce Brosnan. Bond has most recently been played by Daniel Craig.

Amazon has been spending billions of dollars to create and license TV shows and films. Earlier this year, company unit Amazon Studios scored a best-actor Oscar for Casey Affleck's portrayal of a grieving man in the movie "Manchester by the Sea." The movie also won an Academy Award for best original screenplay.

Apple, which is relatively new to the world of original content, began a long-awaited move into television in June with a reality show called "Planet of the Apps."