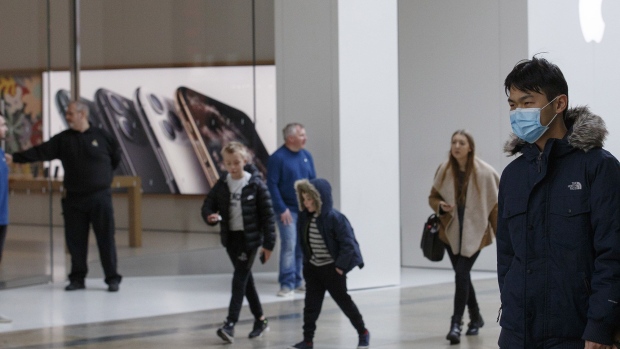 A man wearing a face mask passes outside a closed Apple Inc. store in Southampton, U.K., on Saturday, March 14, 2020. Apple Inc. will close hundreds of retail stores outside of Greater China until March 27 in response to the virus and is and is moving to remote work. , Photographer: Luke MacGregor/Bloomberg

(Bloomberg) -- Apple Inc. is asking retail store landlords to slash the rent for some of its U.K. outlets by as much as 50% but offering to extend leases by several years in return, U.K. newspaper The Sunday Times reported.

The iPhone maker wants fees to match those of retailers benefitting from landlords cutting rents as footfall in shopping centers plummeted during the height of coronavirus lockdown measures.

The profitability of Apple’s 38 U.K. stores is such that landlords are desperate for the company to remain a tenant, the newspaper wrote, without saying how it obtained the information.

Landlords do not have to make a decision yet, as the request is for stores that still have several years left on their leases. Apple declined to make a comment to the Sunday Times.

The push to cut rents comes after Apple reported record second-quarter sales of $59.7 billion and dethroned Saudi Aramco as the world’s most profitable company.

Apple jumped 10% on Friday, ending the day with a record market capitalization of $1.817 trillion. It’s the first time the company’s valuation has surpassed that of Saudi Arabia’s national oil company, which made its market debut in Riyadh in December, and is valued at $1.76 trillion.