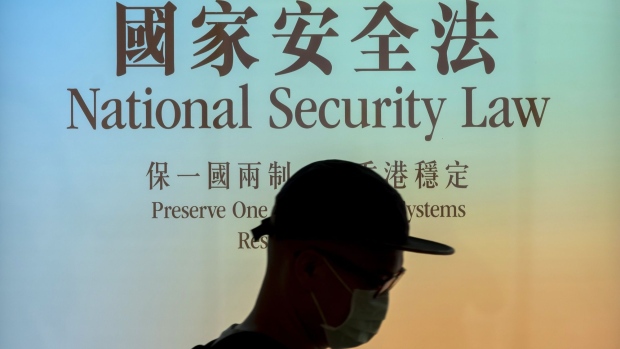 A pedestrian wearing a protective mask walks past a government-sponsored advertisement promoting a new national security law in Hong Kong, China, on Monday, June 29, 2020. The national security law that China could impose on Hong Kong as early as this week won't need to be used if the financial hub's residents avoid crossing certain "red lines," according to Bernard Chan, a top adviser to Hong Kong Chief Executive Carrie Lam. , Bloomberg

(Bloomberg) -- Apple Inc. said it is “assessing” a new Hong Kong security law that has sparked concern about criminalizing protests.

The Cupertino, California-based technology giant also said it has not received requests for Hong Kong user data since the law kicked in last week, and noted that it doesn’t get requests directly from the government there.

“Apple has always required that all content requests from local law enforcement authorities be submitted through the Mutual Legal Assistance Treaty in place between the United States and Hong Kong,” the company said. Under that process, “the U.S. Department of Justice reviews Hong Kong authorities’ requests for legal conformance.”

On Monday, other tech companies, including Google, Twitter Inc. and Facebook Inc. said they would pause processing user data requests from the Hong Kong government as they review the new law.

On its website, Apple said that in the first half of 2019, it received 358 requests for user device information, 155 requests related to fraudulent transactions, and two requests for account data from Hong Kong.