Apple Inc. unveiled new iPhones with camera enhancements and improved battery life, making incremental tweaks to lure buyers ahead of a more substantial overhaul of its handsets in 2020.

Apple, a pioneer of the smartphone era, has struggled recently to maintain the once-frenzied demand for the company’s best-selling product. Most Western and Chinese consumers already own a smartphone and are more reluctant to upgrade due to high prices, cheaper rivals and a lack of new, breakthrough features. Researcher IDC forecast industry shipments to slip 2.2 per cent in 2019, the third year of declines. IPhone shipments are seen dropping 15 per cent this year, according to IDC. New 5G wireless technology may bring back growth, but not until 2020, it said.

During last year’s holiday period, Apple missed its own sales estimates for the first time in about two decades. This year, Apple is hoping the latest models -- and a slew of new digital services -- will keep revenue growth ticking along until bigger handset updates in 2020. Analysts expect total revenue to climb 2 per cent year-over-year in the 2019 holiday quarter, according to data compiled by Bloomberg.

The iPhone 11, iPhone 11 Pro, and iPhone Pro Max are successors to the iPhone XR, iPhone XS, and iPhone XS Max lines. They look similar from the front and continue to have the more advanced organic light-emitting diode screens on the high-end models, and a liquid crystal display on the regular iPhone 11. The new models will distinguish themselves from their predecessors with new colors and finishes as well as new photo capabilities that rival traditional cameras. 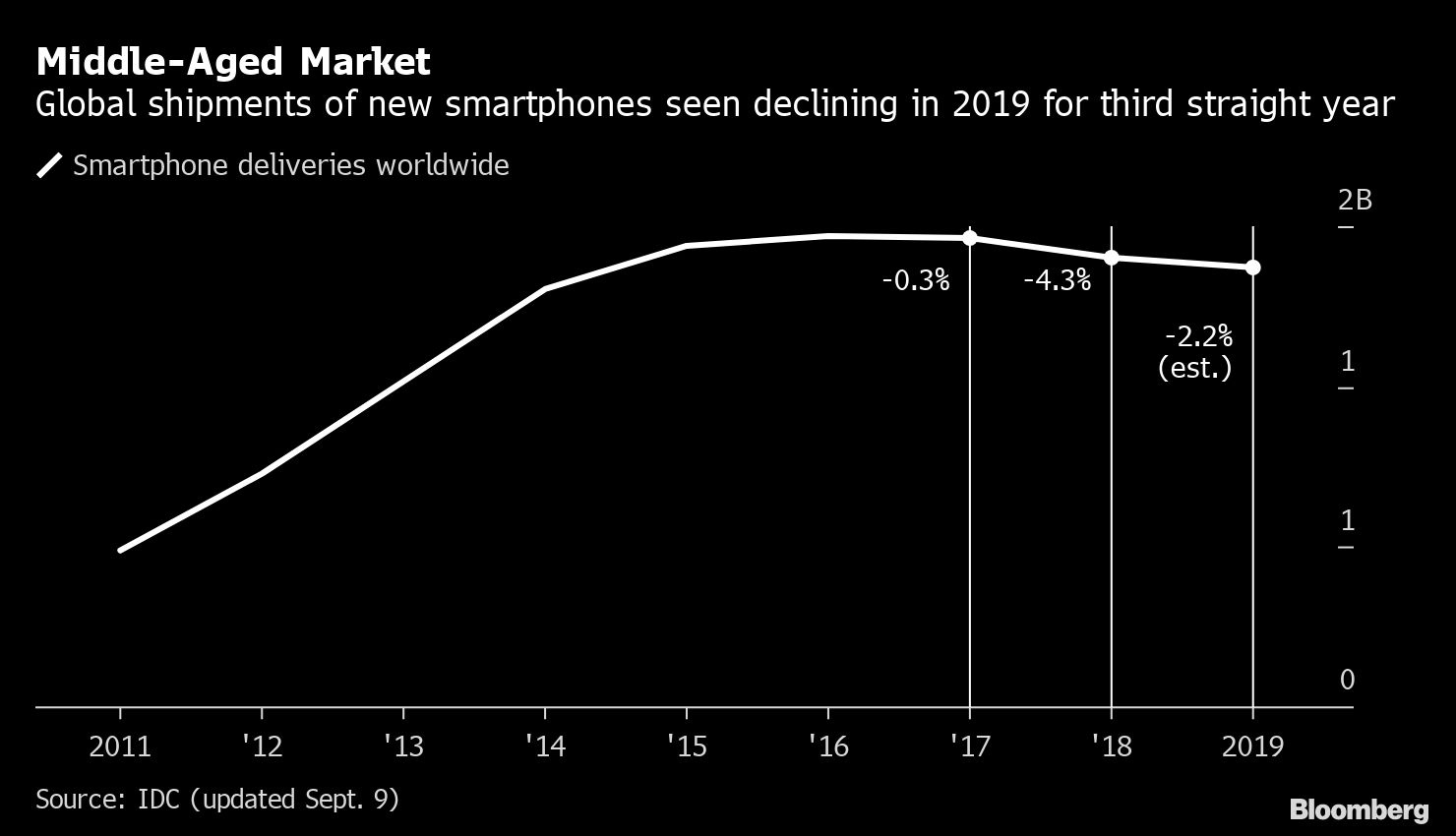 The iPhone 11 adds a second camera on the back for improved Portrait Mode, wide-angle shots, and deeper zoom without a reduction in clarity. The iPhone Pro and Pro Max gain a third back camera with new video and photo software. The phones also add Night Mode for improved pictures in the dark. Google has had this feature on its Pixel phones for some time. The front cameras on the new iPhones now are 12 megapixel and support wide-angle, 4K, and slow-motion image capture.

The iPhone 11 will come in green, purple, black, white, and red, while the iPhone Pro and Pro Max will come in space grey, silver, gold, and a new green color, Apple said.

“Price declines on Apple’s current models are something I haven’t seen in the past," said John Butler, an analyst at Bloomberg Intelligence. "Very telling about the mature state of the smartphone market.”

The U.S. government is set to impose 15 per cent tariffs on the iPhone on Dec. 15. Other products, such as the Apple Watch, have already been hit with this levy. Apple is doesn’t seem to be passing these extra costs on to consumers. 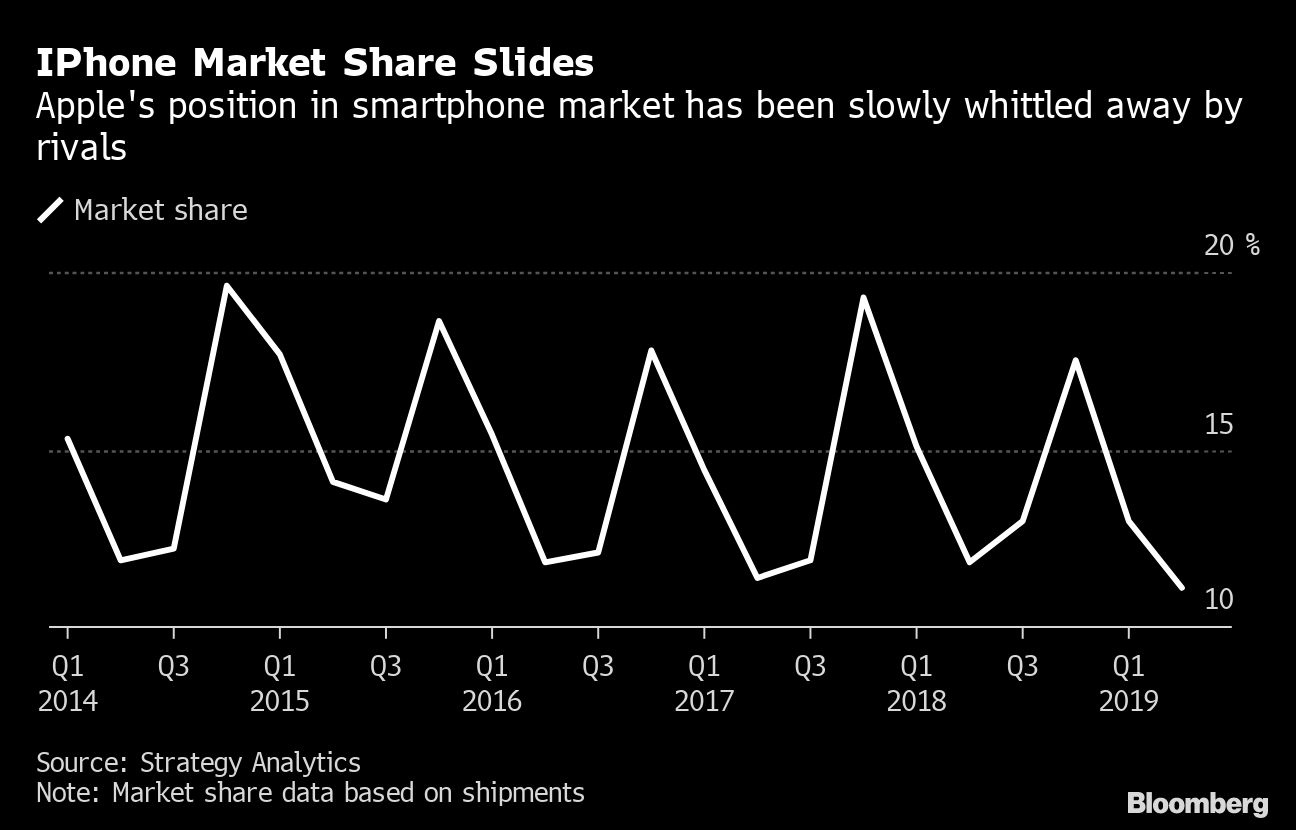 In addition to the camera features, the iPhone 11 adds stronger glass, an hour of more battery life compared to the iPhone XR, faster Face ID, and a new A13 chip. Here are the main upgrades coming to the iPhone Pro and Pro Max:

Apple was one of the first smartphone makers to sell handsets for more than US$1,000, with mixed success. The company is working on another cheap iPhone, a successor to the iPhone SE, for next year, Bloomberg News recently reported. It’s also prepping bigger changes in 2020: a new design, 5G connectivity, and 3-D cameras for enhanced augmented reality apps, according to people familiar with the company’s plans. For next year or the year after, it’s planning in-screen fingerprint scanning. This year’s models all include Face ID, Apple’s facial-recognition technology for unlocking the phones.

The new models go on sale Sept. 20 after pre-orders open Sept. 13. That means some sales will be part of Apple’s current fiscal fourth quarter.