Apple Inc. (AAPL.O) investors are likely looking for the company to use its massive cash pile to make acquisitions, and names like Netflix Inc. (NFLX.O), Activision Blizzard Inc. (ATVI.O) and Sonos Inc. (SONO.O) are among the companies that JPMorgan sees as strong strategic fits.

Shares of Apple have lost more than 25 per cent from an October record, dropping on concerns over the demand prospects for its key iPhone product line. In its most recent quarterly report, the company posted its first holiday-quarter sales decline since 2001, a drop that was almost entirely due to lower smartphone sales. The stock rose 2.6 per cent in early trading on Monday, on track for its fourth straight daily gain.

Given this environment, and considering that Apple has roughly US$130 billion in net cash -- along with an average of US$45 billion in cash flow generated every year after dividends -- investors are likely hoping that Apple “uses its balance sheet strength to insulate the business against often-seen disruptions in the technology landscape,” analyst Samik Chatterjee wrote. JPMorgan has an overweight rating on Apple stock, along with a US$228 price target.

Chatterjee noted that the prospect of such deals was speculative and theoretical. It would also be atypical for Apple, given it has historically not been an aggressive buyer of other companies. According to Bloomberg data, Apple has only twice bought publicly-traded companies.

Furthermore, most of Apple’s acquisitions have been on the smaller side. While it was involved in an US$18 billion purchase of Toshiba Memory Corp -- along with other buyers -- one of its largest deals ever was a US$3 billion acquisition of Beats Electronics in 2014.

Apple didn’t immediately return a request for a comment, and neither did Netflix or Activision. A spokesperson for Sonos said the company doesn’t comment on rumors or speculation.

In JPMorgan’s view, video gaming, video content and smart home speakers are among the industries with “the most strategic value,” for Apple, “providing potential growth opportunities to leverage services over a wider installed base.”

Netflix was deemed “the best strategic fit” for Apple in the content category, “although we appreciate a combination is less likely as Netflix is unlikely to be a seller for a modest premium.” The video-streaming giant has a market capitalization of US$148.4 billion, which would make it Apple’s largest acquisition by far, even without a premium.

Video content provides “leverage to rapid growth in content consumption on mobile” and Netflix has “an established platform to accelerate Apple’s nascent investments in original content,” Chatterjee wrote to clients. Shares of Netflix rose 2.4 per cent on Monday.

The speaker category has a “focus on high engagement with customers,” and it offers “synergies in driving Apple Music services.”

Apple is “currently lagging competitors in the smart home category,” JPMorgan wrote, referring to the company’s HomePod product line. Sonos, in contrast, has a “differentiated position as a premium home speaker system relative to Amazon Alexa and Google Home,” along with “strong loyalty among current customers and [a] robust international presence.”

Sonos had a market cap of US$1.2 billion, as of Friday’s close. The stock rose as much as 8.5 per cent on Monday, its seventh straight daily gain -- the longest such streak in its history.

For Apple, a video-game acquisition would offer “leverage to an industry rapidly transitioning to mobile,” while the “hardware capabilities for high-end gaming potentially [support] a replacement cycle.”

Among targets mentioned in press reports, JPMorgan wrote, “we find Activision Blizzard to be the best strategic fit” for Apple. Shares of Activision rose 1.2 per cent. The company had a market cap of US$35.1 billion through Friday. 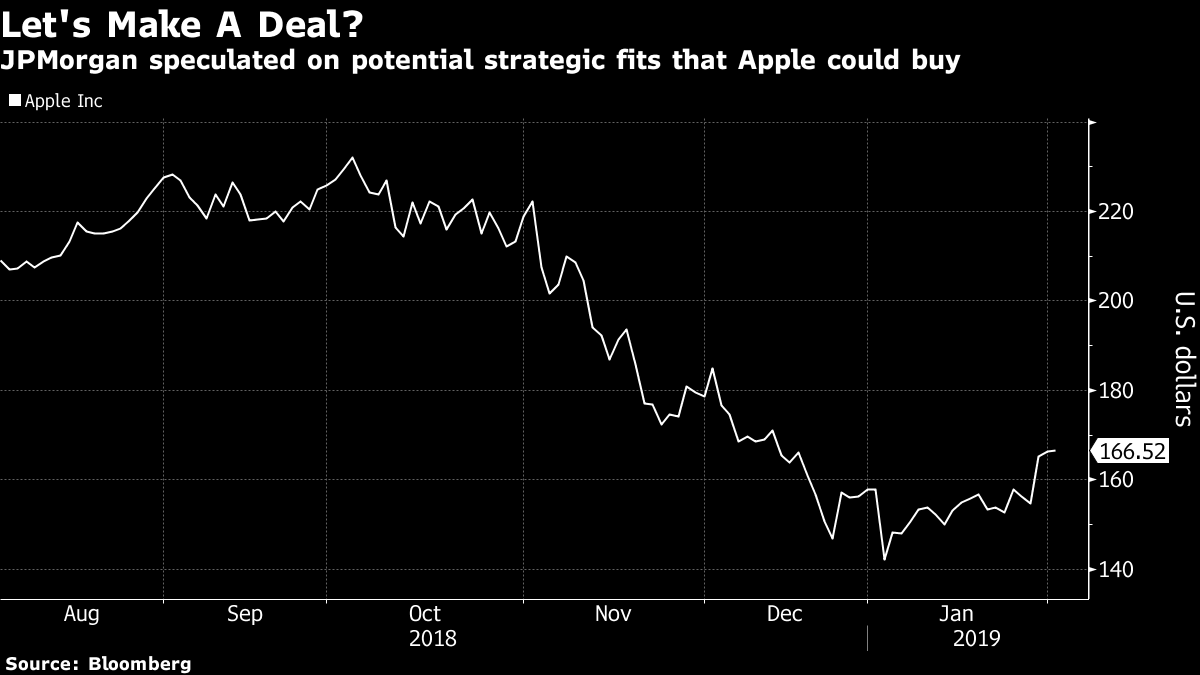