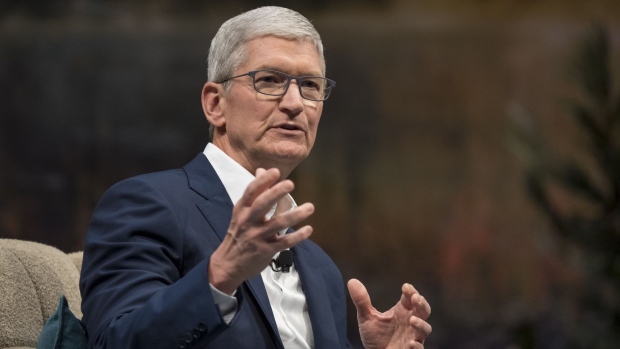 Tim Cook, chief executive officer of Apple Inc., speaks during a keynote at the 2019 DreamForce conference in San Francisco, California, U.S., on Tuesday, Nov. 19, 2019. Salesforce.com Inc.’s annual software conference, where it introduces new products and discusses its commitment to social causes, was interrupted for the second year in a row by protests against the company’s work with the U.S. government. , Bloomberg

(Bloomberg) -- Apple Inc. Chief Executive Officer Tim Cook said Apple will build chips in the US for the first time in nearly a decade, a key step in reducing its reliance on Asia-based manufacturing.

Cook spoke Tuesday alongside President Joe Biden and executives from chip companies at the site of a Taiwan Semiconductor Manufacturing Co. plant under construction in Phoenix. Cook said Apple will expand its relationship with TSMC, which already produces chips for the iPhone maker, when the US factory opens in 2024.

“As many of you know, we work with TSMC to manufacture the chips that help power our products all over the world,” the Apple CEO said. “And we look forward to expanding this work in the years to come — as TSMC forms new and deeper roots in America.”

Cook said the Apple silicon chips found in most of its devices will be built at the Phoenix plant. “Thanks to the hard work of so many people, these chips can be proudly stamped ‘Made in America,’” he said.

Initially, the plant will only build chips in small quantities for Apple and may use technology that is inferior to what the company will need for its flagship devices in 2024. Bloomberg News first reported on Apple’s plan to build chips in Arizona last month.