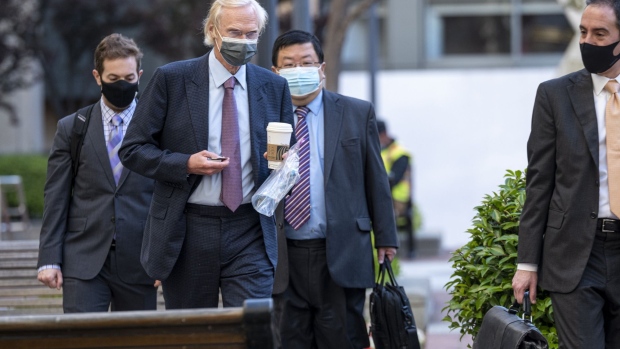 (Bloomberg) -- Apple Inc. provided in-depth detail on how many apps it rejected last year and why its iPhone payment system keeps customers secure, seeking to deflect claims from Epic Games Inc. that its review process and purchase system is a deterrent to competition.

The Cupertino, California-based technology giant on Tuesday said in a statement that it prevented more than $1.5 billion in “potentially fraudulent transactions” last year, underscoring the need for its proprietary payment system at the heart of the on-going antitrust trial with Epic. Over the course of litigation brought by Epic, the game maker has claimed that Apple uses its payment system, which takes a 15% to 30% cut of transactions, and app approval process to juice profits and hurt developers.

The iPhone maker provided several new statistics about its app review process and payment system to back up its defense that those measures are in place to protect consumers:

Apple said its app review team “is an essential line of defense” and can protect users from apps that would facilitate the purchase of drugs, predatory loans, gambling and pornography. The company blocked 110,000 apps found on pirate app stores that circumvented its App Store over the last year and blocked 3.2 million apps distributed through its enterprise program in the last month.

The trial in Oakland, California, comes as Apple faces a backlash -- with billions of dollars in revenue on the line -- from global regulators and some app developers who say its standard App Store fee of 30% and other policies are unjust and self-serving. Apple’s disclosure of how many apps it rejects also serves its argument against Epic’s request for a ruling that would unravel the app review process and pave the way for alternative payment systems.

The fight with Epic blew up in August when the game maker told customers it would replace Apple’s in-app purchase system with its own, circumventing Apple’s commissions from add-ons inside of Fortnite. Apple then removed the game, cutting off access for more than a billion customers.

Apple, which vehemently denies abusing its market power, has called Epic’s legal gambit a “fundamental assault” on a business model that’s beneficial to both developers and consumers.