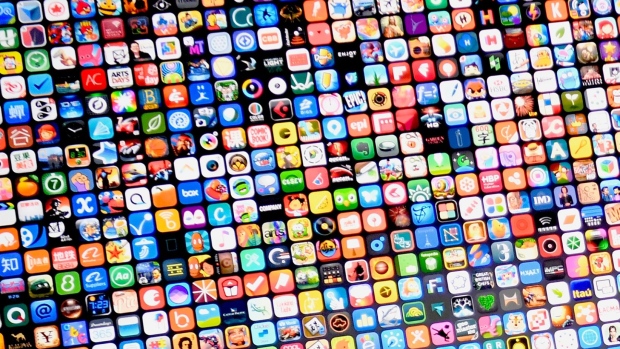 Apple’s App Store is under scrutiny from government officials in the US and Europe. , Photographer: Bloomberg/Bloomberg

(Bloomberg) -- Apple Inc., facing mounting criticism of its App Store policies, defended the platform Wednesday by pointing to the small-business jobs and revenue it generates.

The company cited a study by Analysis Group that found developers who earn under $1 million from the App Store annually saw total revenue rise 113% over a two-year period starting in 2019. In the US, that number reached 118%, though it was lower in some countries such as the UK and Japan.

The study, commissioned by Apple, also found the App Store supports 2.2 million jobs in the US and that more than 90% of developers are considered small businesses.

In 2020, Apple cut its commission in half for developers who generated under $1 million in the previous calendar year, which may be a factor in the revenue increase. Apple typically charges a 30% fee, but developers who enroll in the company’s small-business program pay just 15%.

Big Tech companies have routinely used small businesses -- and their reliance on software platforms to grow -- as a talking point against critics and regulators. Meta Platforms Inc., the owner of Facebook, has even used the tactic against Apple, saying that the iPhone maker’s privacy restrictions make it more expensive for small businesses to reach their customers.

The App Store is under intense scrutiny from government officials in the US and Europe, which also have been going after competitors like Meta and Alphabet Inc. The Digital Markets Act in Europe and potential new laws in the US are seeking to upend Apple’s App Store rules in a bid to make the market more competitive.