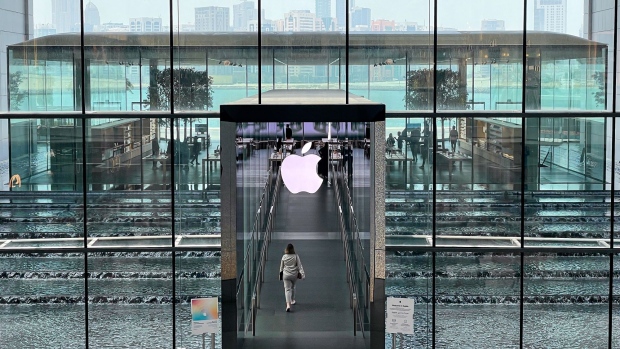 A shopper enters the Apple Inc. store in The Galleria shopping complex on Al Maryah Island in Abu Dhabi, United Arab Emirates, on Sunday, April 10, 2022. Abu Dhabi regulators approved a framework for special purpose acquisition companies, looking to capture some of the blank-check boom that has gripped global markets for the past two years. Photographer: Christopher Pike/Bloomberg , Bloomberg

John Stauffer is exiting Apple after about 24 years to become a vice president of engineering at the online gaming platform. He was one of a handful of company vice presidents to report directly to software engineering chief Craig Federighi.

The departure adds to upheaval at Apple, with a series of vice presidents leaving in recent months. The company’s head of procurement was ousted in September, while its chief privacy officer, head of industrial design, chief information officer, vice president of software engineering for information systems, and vice president of online retail have all recently stepped down.

Stauffer oversaw a team of more than 1,000 engineers and was responsible for most of Apple’s media, graphics, display and communications software technologies across the iPhone, iPad, Apple TV, Apple Watch and other devices.

The veteran executive, who ran what is known as the Interactive Media Group, also helped develop features like AirPlay, FaceTime and CarPlay, as well as the software that powers the graphics components inside of devices, according to his LinkedIn profile. And he contributed to Apple’s work on its upcoming augmented and virtual reality headset.

In his new job, Stauffer will oversee the Roblox Engine, which the gaming provider describes as the “heart of the company’s social 3D runtime platform.” An Apple representative didn’t immediately respond to a request for comment.

Stauffer is little known outside of the Cupertino, California-based technology giant, but was seen as a key executive within the company. He was briefly in the spotlight during Apple’s legal fight with Epic Games Inc. over App Store rules and fees. An email exchange with Stauffer and Federighi was included as evidence.

The executive suggested in 2017 that Apple should begin moving some of its key applications and features to the cloud. He argued that Apple could create the “largest application ecosystem” in the world by offering cloud-based applications that run its devices via the web rather than on the hardware itself.

Stauffer said this would improve game availability on Macs, allow the release of pro apps on low-end devices and unify apps across Apple’s platforms. Federighi dismissed the idea, saying it countered Apple’s business model and work on higher-end processors such as those found in the latest Macs. To date, Apple still doesn’t rely heavily on the cloud for applications, though a shift to cloud computing at other technology companies has gained momentum.