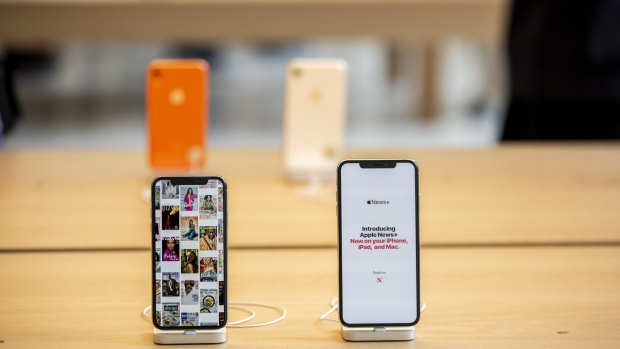 Apple Inc. iPhone smartphones sit on display during the opening of the company's new Carnegie Library store at Mount Vernon Square in Washington, D.C., U.S on Saturday, May 11, 2019. , Bloomberg

Apple Inc. (AAPL.O) could see the production costs for its flagship iPhone rise 2-3 per cent given the impact that trade tensions between the U.S. and China are having on input materials like lithium batteries, according to Wedbush analyst Daniel Ives.

Ives cautioned that the impact could easily get worse for Apple, which he described as the ``poster child'' for companies facing trade-related headwinds. The company relies on Chinese labor for the production of nearly all of its devices, and it derived nearly 20 per cent of its 2018 sales from the Chinese market, according to data compiled by Bloomberg.

If the Trump administration levies additional tariffs, "this would be more of a potential game changer from the perspective of the incremental costs to Apple and its iPhone production,'' Ives wrote. Under this "more draconian scenario,'' expenses could escalate "by roughly 10 per cent+ over time.''

Last week, Morgan Stanley estimated that Apple's fiscal 2020 earnings could drop by about 23 per cent in a worst-case trade scenario.

Shares of Apple rose 1.1 per cent in pre-market trading. However, this comes after a three-day decline, including a 5.8 per cent slump in Monday's session that was the company's biggest one-day drop since January, when it cut its revenue forecast. Last week, Apple shares had their biggest weekly decline since December.

Apple and CEO Tim Cook is "seeing pressure on both ends of the spectrum,'' Ives wrote, referring to weakness in both supply and demand. The company's Foxconn factory is ``the hearts and lungs of the Cupertino iPhone franchise,'' while China is ``a growth linchpin region'' that represents 20 per cent of all iPhone upgrades over the next 12 to 18 months.

More than 60 per cent of Apple's 2018 revenue came from the iPhone, according to data compiled by Bloomberg.