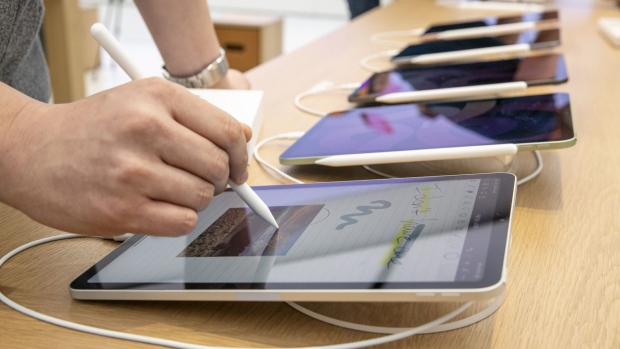 (Bloomberg) -- The next-generation display destined to be a highlight of Apple Inc.’s upcoming top-tier iPad Pro is facing production issues that could lead to short initial supplies of the new device, according to people familiar with the matter.

The Cupertino, California-based tech giant plans to showcase a new MiniLED display technology in the 12.9-inch iPad Pro set to be announced as early as the second half of April. But the firm’s overseas suppliers are dealing with poor manufacturing yields, the people who asked not to be named discussing sensitive matters said. At least one of the MiniLED makers has had to recently pause production as a result, one person added.

Apple still intends to announce updated iPad Pro tablets in two sizes as early as this month, other people familiar with its product road map said. The MiniLED screen, which will improve contrast ratios and deliver a brighter picture, will be exclusive to the pricier 12.9-inch model. The production hiccup could mean that the larger iPad Pro will ship later and be available in constrained quantities to begin with, the people said.

Bloomberg News reported last month that Apple was gearing up to debut new iPad Pros in April. An Apple spokeswoman declined to comment.

The new iPad Pro models will be Apple’s first major hardware launch of 2021 and will add to a product line that has performed particularly well as people increasingly work and study from home. Beyond the new display, Apple plans to add a much faster processor on par with the custom M1 chip in its latest Macs, a faster USB-C port that’s compatible with a wider range of accessories and monitors and improved cameras.

The iPad generated $8.4 billion in revenue for Apple during the holiday quarter of 2020, the most since 2014. As students and workers begin gradually returning to schools and offices, Apple will be betting on the upgraded iPad models to maintain interest in its tablet line.