Apple Inc., the world’s most valuable company, has finally joined a growing list of household names from Toyota to Samsung forced to cut back on business because of a global shortage of semiconductors.

Apple is now likely to slash its projected iPhone 13 production targets for 2021 by as many as 10 million units, Bloomberg News reported Tuesday.

For months, while supply chain shocks rocked the electronic, automaking, and even commodities industries, Apple remained the one company that could secure the chips needed to keep selling its latest range of products, due to its well-managed supply chain and the prestige of meeting its exacting standards.

But the recent setback for Apple has dashed any hopes that the supply-chain crisis was easing.

“If this is happening to the most powerful company,” it could happen to anyone, said Neil Campling, an analyst at Mirabaud Securities. Given “they have huge power in terms of their ability to source semiconductors as such a key customer, then everyone else will be having greater issues than they are.”

Apple’s scaleback is a clear sign that the supply disruptions that have wreaked havoc around the world are worsening, which may jeopardize the outlook for the post-pandemic economic recovery. Almost all major manufacturers have been impacted both by a lack of key materials such as semiconductors, but also an inability to get finished goods into the hands of consumers.

President Joe Biden is set to focus on transportation bottlenecks on Wednesday, with the congested Port of Los Angeles planning a 24 hours a day, seven days a week effort to confront the squeeze on goods. A.P. Moller-Maersk A/S said it had to divert some ships from the U.K.’s largest container port because of congestion tied to a trucker shortage. 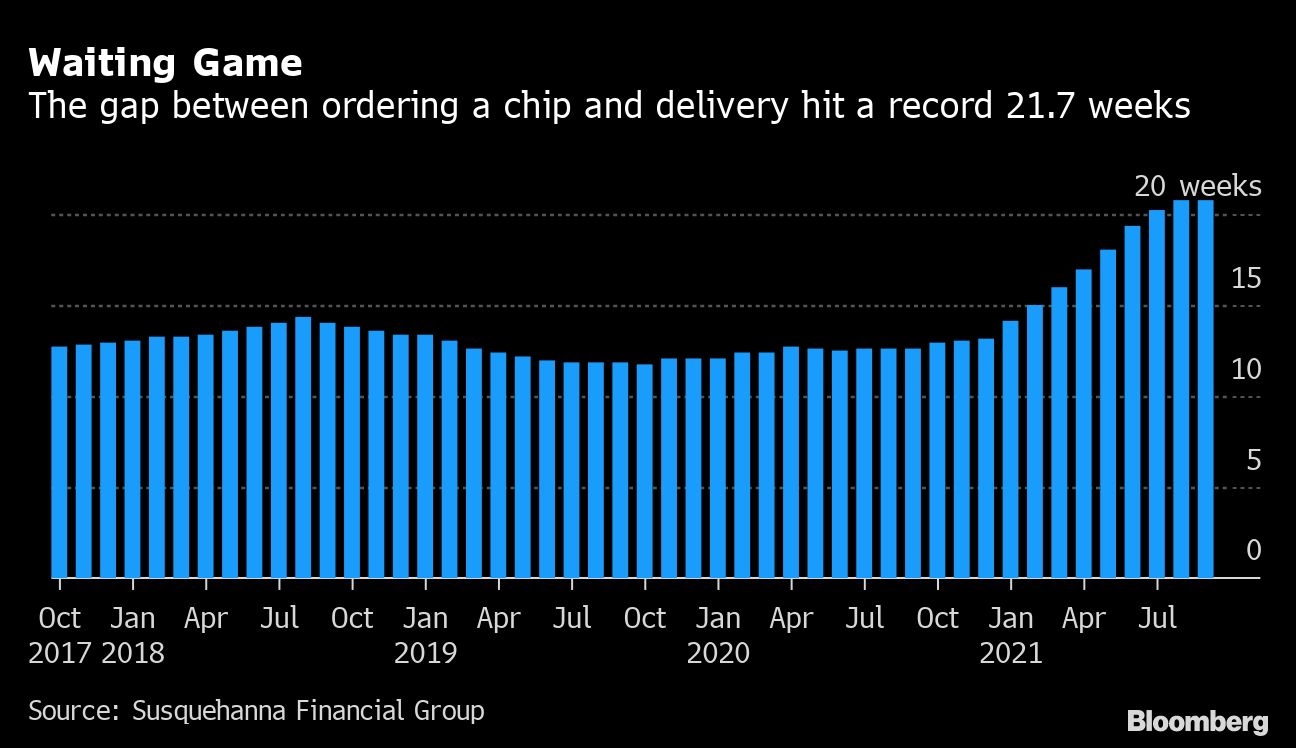 “Recent rumblings from chip producers suggest that the problems are expected to persist,” Deutsche Bank AG strategists including Jim Reid, global head of fundamental credit strategy wrote in a note. That “will make central bank decisions even more complicated over the coming weeks as they grapple with increasing supply-side constraints that push up inflation whilst threatening to undermine the recovery.”

Apple had expected to produce 90 million new iPhone models this year, but is now telling manufacturing partners that the total will be lower because Broadcom Inc. and Texas Instruments Inc. are struggling to deliver enough components, said the people, who asked not to be identified because the situation is private.

Japan Display Inc., which gets more than half of its revenue from Apple, fell as much as 5.6 per cent, joining U.S. suppliers that fell in postmarket trading.

The shortage of semiconductors stems mainly from years of under-investment coupled with a failure to gauge the explosion in demand for connected devices. Even industry insiders were caught by surprise. ASML Holding NV CEO Peter Wennink, whose company sells the machines that enable most cutting-edge chipmaking, said in July it’s underestimated the growth of the semiconductor industry over the past 15 years.

The amount of time that companies need to wait for chip orders to get filled has set records for nine straight months, signaling that semiconductor shortages will continue to plague businesses well into 2022 and likely beyond. AlixPartners, a global consulting firm, estimated last month that the global automotive industry will lose about US$210 billion in sales for 2021 alone.

Earlier this year, Apple had already warned that it would face supply constraints of the iPhone and iPad during the quarter that ended September. But it held off from reducing its internal projections at the time. 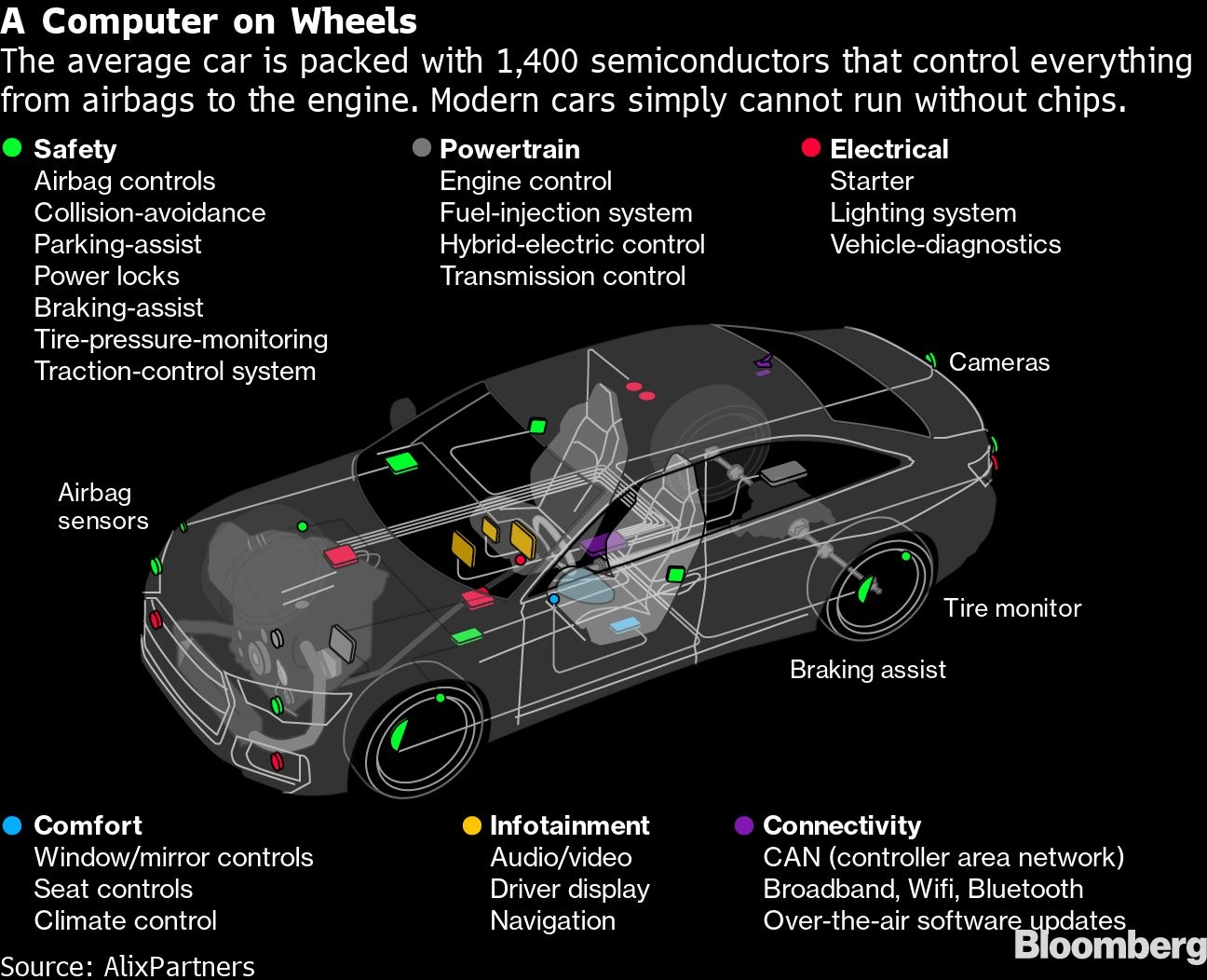 The timing couldn’t be worse. The year-end quarter was expected to be Apple’s biggest sales blitz yet, generating about US$120 billion in revenue. That would be up about 7 per cent from a year earlier -- and more money than Apple made in an entire year a decade ago.

In addition to facing tight iPhone availability, the company has struggled to make enough of the Apple Watch Series 7 and other products.

Some analysts however spot an opportunity for Apple.

“If Apple can’t meet near-term demand, the shortfall is likely to be even greater at competitors, creating an opportunity for share gains,” Morgan Stanley analysts wrote after Bloomberg’s report.