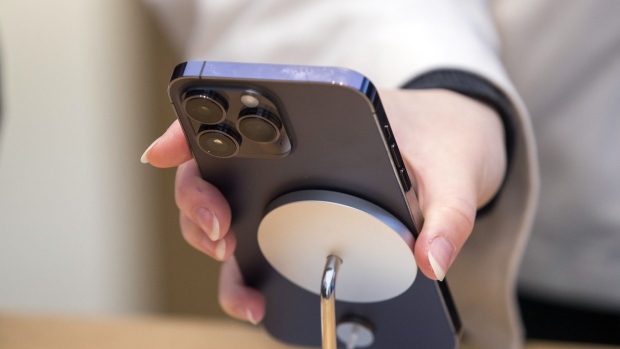 A customer looks at an Apple Inc. iPhone 14 Pro smartphone at an Apple store in Sydney, Australia, on Friday, Sept. 16, 2022. The latest iPhone hits stores today, and Apple is counting on well-heeled shoppers to make the device a hit during a year of roaring inflation and shaky technology spending. , Bloomberg

(Bloomberg) -- Apple Inc. released a software update aimed at fixing bugs found in early iPhone 14 units, including a problem that made the device’s camera shake when used with some apps.

The update, known as iOS 16.0.2, resolves an issue that made the camera vibrate and take blurry photos when users were in third-party apps like TikTok and Instagram. Customers took to social media after the new iPhones launched last Friday to complain about the bug, which affected Pro and Pro Max models.

The software update also fixes a problem that made some displays turn black during device setup, an issue that presented a copy-and-paste approval prompt more frequently than necessary, and glitches that caused the VoiceOver feature and displays on older iPhones to become unresponsive.

The software update marks the second so far for the iPhone 14, which had a fix last week related to FaceTime. The company is planning another update, iOS 16.1, for next month -- to accompany the initial iPadOS 16 release and to enable the launch of iPhone 14 satellite connectivity for emergency texting in November.