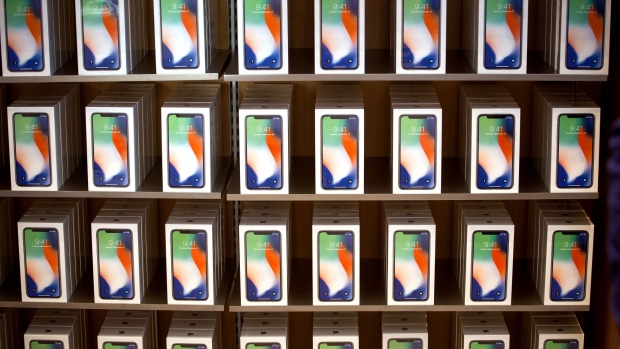 Apple Inc. iPhone X smartphones are displayed during the sales launch at a store in New York, U.S., on Friday, Nov. 3, 2017. The $1,000 price tag on Apple Inc.'s new iPhone X didn't deter throngs of enthusiasts around the world who waited -- sometimes overnight -- in long lines with no guarantee they would walk out of the store with one of the coveted devices. , Bloomberg

Apple Inc. (AAPL.O) has a backup plan if the U.S.-China trade war gets out of hand.

The Cupertino, Calif.-based company’s primary manufacturing partner has enough capacity to make all iPhones bound for the U.S. outside of China if necessary, according to a senior executive at Hon Hai Precision Industry Co. The Taiwanese contract manufacturer now makes most of the smartphones in the Chinese mainland.

China is a crucial cog in Apple’s business, the origin of most of its iPhones and iPads as well as its largest international market. But President Donald Trump has threatened Beijing with new tariffs on about US$300 billion worth of Chinese goods, an act that would escalate tensions dramatically while levying a punitive tax on Apple’s most profitable product.

Hon Hai, known also as Foxconn, is the American giant’s most important manufacturing partner. It will fully support Apple if it needs to adjust its production as the U.S.-Chinese trade spat gets grimmer and more unpredictable, board nominee and semiconductor division chief Young Liu told an investor briefing in Taipei on Tuesday.

“Twenty-five percent of our production capacity is outside of China and we can help Apple respond to its needs in the U.S. market,” said Liu, adding that investments are now being made in India for Apple. “We have enough capacity to meet Apple’s demand.”

Apple has not given Hon Hai instructions to move production out of China, but it is capable of moving lines elsewhere according to customers’ needs, Liu added. The company will respond swiftly and rely on localized manufacturing in response to the trade war, just as it foresaw the need to build a base in the U.S. state of Wisconsin two years ago, he said.

The U.S. market accounts for one in every four iPhones sold worldwide, "so it represents a huge portion of Foxconn’s manufacturing business inside China," Strategy Analytics analyst Neil Mawston said.

Foxconn would need at least one or two big factories outside China dedicated to serving Apple’s U.S. requirements, Mawston estimated. If Foxconn freed up non-China production capacity for iPhones, other smartphone clients could find their orders temporarily delayed or sidelined in the short-term, he added.

Foxconn could shift some overseas work back to China to compensate. But without that, some of its Chinese factories may be idled.

And it’s not just about the simple assembly of finished goods. The trade war has disrupted a complex global supply chain involving many countries beyond just China and the U.S. Many components that go into devices aren’t made in the U.S., despite being designed there. A phone chip designed by Apple may come out of a factory in Taiwan, then be packaged (a process that prepares it for integration into a circuit) somewhere else, before being shipped to China for assembly into an iPhone.

"It would be relatively easy to shift final assembly of the iPhone outside China, but moving to full production of the components and the whole handset would be much tougher," Mawston said.

It’s unclear if India will ever become a major production base for Apple’s marquee device. Foxconn is now running quality tests for the iPhone Xr series there and plans to begin mass production at a facility in the suburbs of Chennai. Older models are already assembled at a Wistron plant in Bangalore.

Foxconn has also agreed to build a 13,000-worker facility in Wisconsin in exchange for more than US$4.5 billion in government incentives. But that project has since come under criticism for low-paying jobs, sudden dismissals and ever-changing goals. On Tuesday, executives reaffirmed that employment goal, saying construction remained on schedule and that it will hire as many as 2,000 Americans by the end of 2020.

It will also start making networking and server products for the U.S. market by the end of next year, on top of LCDs starting next year, Liu said.