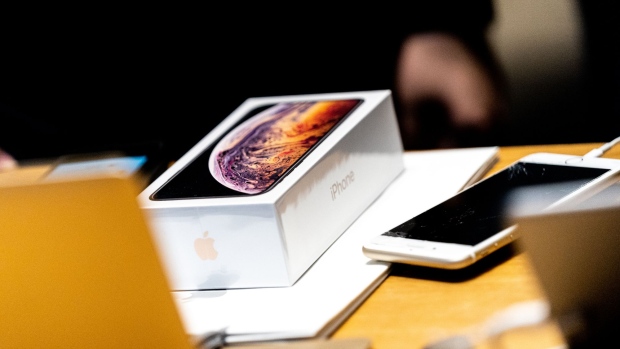 An Apple Inc. iPhone XS smartphone box sits on a shopping bag during a sales launch at a store in New York, U.S., on Friday, Sep. 21, 2018. The iPhone XS is up to $200 more expensive than last year's already pricey iPhone X and represents one of the smallest advances in the product line's history. But that means little to the Apple Inc. faithful or those seeking to upgrade their older iPhone. Photographer: Jeenah Moon/Bloomberg , Bloomberg

(Bloomberg) -- Apple Inc. assembly partner Pegatron Corp. is making preparations for its first plant in India, adding to a large influx of foreign tech investments in the country this year.

In June, the Indian government set out a $6.6 billion plan to woo the world’s top smartphone manufacturers, offering financial incentives and ready-to-use manufacturing clusters. Pegatron is now setting up a local subsidiary and joining fellow Taiwanese electronics assemblers Foxconn Technology Group and Wistron Corp., who have already been making some iPhone handsets in southern India.

With a number of factories in China, Pegatron is the second-largest iPhone assembler and depends on Apple for more than half of its business. Like its peers, it will set up in the south of India, according to a person familiar with its plans who asked not to be named. Foxconn, also known as Hon Hai, and Wistron are looking to expand their operations in the country, and Pegatron’s entry can be seen as a defensive move to protect its share of budget iPhone manufacturing, according to Matthew Kanterman of Bloomberg Intelligence.

Pegatron could uphold its iPhone SE assembly market share, which may have grown from a 50-50 split with Hon Hai.

India has seen a surge of inward investment in recent weeks, with Google, Facebook Inc. and others pouring close to $20 billion into Jio Platforms Ltd., billionaire Mukesh Ambani’s mobile internet venture. Google has committed to spending $10 billion over the next five to seven years to hasten India’s digital transition and Amazon.com Inc. has said it intends to export $10 billion of made-in-India goods by 2025. When Jeff Bezos visited the country in January, he said “The 21st century is going to be the Indian century.”

The country offers a vast pool of skilled labor as well as a domestic market of a billion mobile connections. Only about half of those are smartphones, however, leaving untapped potential that is attractive to growth-hungry global brands like Apple, Samsung Electronics Co., Xiaomi Corp. and Oppo. For assemblers like Pegatron, exports would also be an enticing opportunity, especially at a time of worsening trade relations between Washington and Beijing making it imperative to have a diverse geographic base.

Smartphones are a focal point for Prime Minister Narendra Modi’s much-touted Make in India program. Ravi Shankar Prasad, India’s minister for information technology and electronics, has said the goal is for brands and manufacturers to transport the entire supply chain to the country, not just the end-stage assembly. Quoted by local media, Prasad said India wants not only the “bridegroom” but also the “wedding procession.”

India will become a global manufacturing hub for both components and the complete assembly of smartphones and other devices, said Pankaj Mohindroo, chairman of the Indian Cellular & Electronics Association. The group’s three dozen members include Apple, Foxconn, Google, Wistron, Oppo and others.

“The focus is shifting from making for India to exports and the $400 billion electronics manufacturing that India is targeting by 2025 will be dominated by exports,” Mohindroo said via phone from New Delhi.