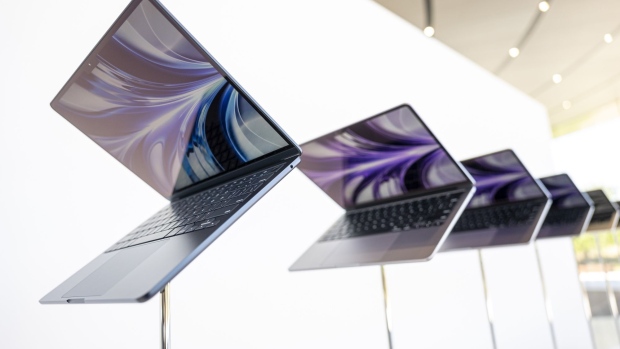 The new MacBook Air laptop computers is unveiled during the Apple Worldwide Developers Conference at Apple Park campus in Cupertino, California, US, on Monday, June 6, 2022. Apple unveiled the most significant overhaul to its popular MacBook Air laptop in more than a decade, bringing a fresh design, new colors and a speedier M2 processor from its homegrown chip line. Photographer: David Paul Morris/Bloomberg , Bloomberg

Quanta announced in April its Shanghai site halted operations to comply with the local government’s Covid curbs. Spokesperson Carol Hsu said the company obtained approval to resume operations in a closed-loop system that same month, but the restart was bumpy due to logistics disruptions and a shortage of workers. The Shanghai unit returned to full production only in late June, she said.

The extent to which that delayed Apple’s shipments remains unclear. While MacBook Pro models are immediately available in the U.S., there’s still about a two-week wait for the recently updated MacBook Air, according to Apple’s official website.