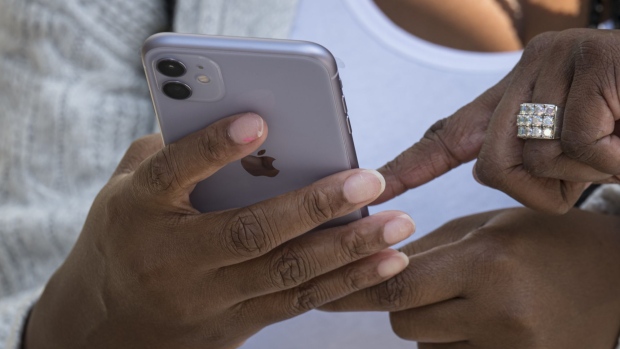 A customer holds an Apple Inc. iPhone 11 outside a store in San Francisco, California, U.S., on Friday, Oct. 23, 2020. The iPhone 12 and iPhone 12 Pro went on sale in stores, but with individual shopping sessions replacing the famous lines and crowds around locations. , Bloomberg

(Bloomberg) -- A federal judge allowed a lawsuit against Apple Inc. to proceed with a claim that its Siri voice assistant violates users’ privacy but dismissed a claim under California’s Unfair Competition Law.

U.S. District Judge Jeffrey White in Oakland on Thursday ruled that the plaintiffs had adequately alleged that their privacy was violated by “accidental activations” when the user neither intends nor expects Siri to be “listening” and thereafter recording voice conversations. But the judge said the suit did not show the economic harm necessary to sustain a claim under the UCL that Apple deceptively marketed the voice assistant.