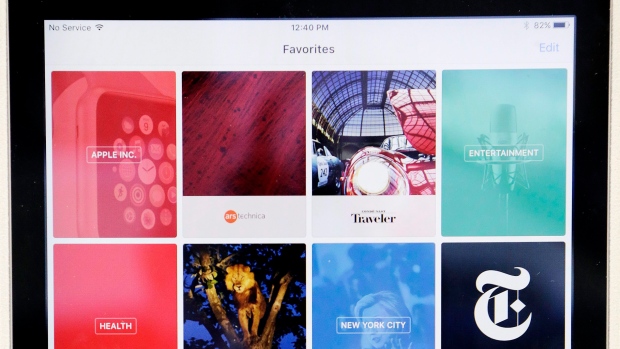 The "favorites" section of Apple's new News app is displayed on an iPad, Wednesday, Sept. 2, 2015 in New York. , The Canadian Press

TORONTO -- Apple Inc. will debut its Apple News app in Canada early next week, after years of operating in the U.S. and a handful of other countries.

The U.S.-based tech giant's iOS and macOS app, which curates news based on a user's interests, will launch with English and French content from publications including CBC, Radio Canada, La Presse, CTV News, the Toronto Star, Hockey News, the Walrus and Global News, but will eventually grow to include stories from other publications.

Publications will keep 100 per cent of the revenue from ads they sell in Apple News, but will give up a slice of the revenue they make from subscriptions on the platform.

According to a developer page on Apple's website, publications will keep 70 per cent of revenues in the first year of a new subscription. If that subscriber hangs on past a year, the publication's net revenue will increase to 85 per cent of the subscription price. The model will not count free trials and bonus periods.

Apple News' move into Canada comes after Apple faced criticism in the U.S. for its app's potential to cut into the profits of the struggling media industry, which has dealt with declining newspaper ad revenues and subscribers, closures of local papers and layoffs in recent years.

Social media and technology companies have also caught flak for widely disseminating online journalism without sharing the cash they earn from it -- primarily through clicks and advertising -- with the content's creators.

Asked to discuss the revenue-sharing aspect of their agreements, La Presse declined, saying, "we do not comment on our strategies."

Randy Lennox, President of CTV's parent company Bell Media, said in an email that "One of the key priorities at Bell Media is to deliver our content to audiences wherever they are, and we're excited and committed to providing real-time leading news and sports information on Apple News."

CBC spokesman Chuck Thompson noted that his organization's content has been on the app since 2017 and available to the U.S., Australian and U.K. markets.

"We look forward to when Apple News launches in Canada as this will provide another opportunity to reach more Canadians with our news service," he said.

Jon Festinger, a faculty member at the Centre for Digital Media in Vancouver, said whether Apple News is a good or bad idea for a publisher depends in part on their exact compensation and extra terms and conditions that could have been built into agreements.

He figures some publications might have gotten involved with the app primarily for exposure and to ensure they keep up with the digital age.

"Some entities might be joining Apple News because they want to be everywhere, even if it isn't purely profitable," he said. "Even if it is break even for them, it might be worth it because they might see it as not losing ground."

CTV News and BNN Bloomberg are both divisions of Bell Media, which is owned by BCE.