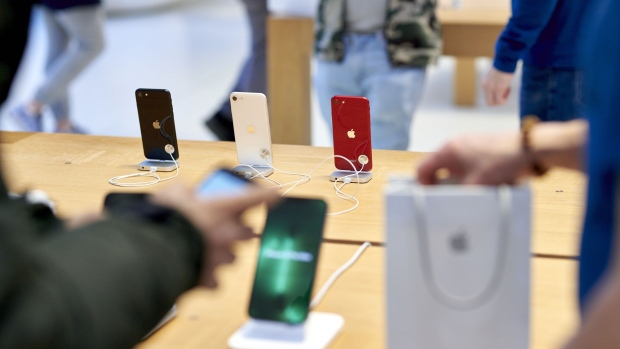 (Bloomberg) -- Apple Inc. retail workers in Oklahoma City are slated to vote next month on whether to make their store the company’s second unionized US location.

The employees will vote Oct. 13 and Oct. 14 on whether to join the Communications Workers of America, National Labor Relations Board spokesperson Kayla Blado said Wednesday. Under an agreement between the union and the company, the vote will be conducted in person.

Workers at the store petitioned on Sept. 1 for an election, saying they had signed up roughly 70% of the site’s eligible workers. If a majority of voters cast ballots in favor of the union -- and the federal agency certifies the result -- the company would be legally obligated to collectively bargain over working conditions at the store.

“I’m extremely confident about this vote,” Oklahoma City Apple employee Patrick Hart, a member of the union’s organizing committee, said Wednesday. “It’s time for us, the people who really drive this company, its workforce, to truly have a voice.”

Retail staff at an Apple store in Towson, Maryland, voted in June to unionize with the International Association of Machinists, marking one of several recent landmark labor wins at prominent US companies, including Amazon.com Inc., Starbucks Corp., Trader Joe’s and Chipotle Mexican Grill Inc.

The union petitioned in April to represent Apple store employees in Atlanta, but withdrew that request the week before a planned vote. In scrapping the election, it cited alleged illegal union busting by Apple, as well as Covid-19 safety concerns about in-person voting.

When asked about labor efforts and union-busting allegations, the comany has previously said that it is “pleased to offer very strong compensation and benefits for full-time and part-time employees, including health care, tuition reimbursement, new parental leave, paid family leave, annual stock grants and many other benefits.”