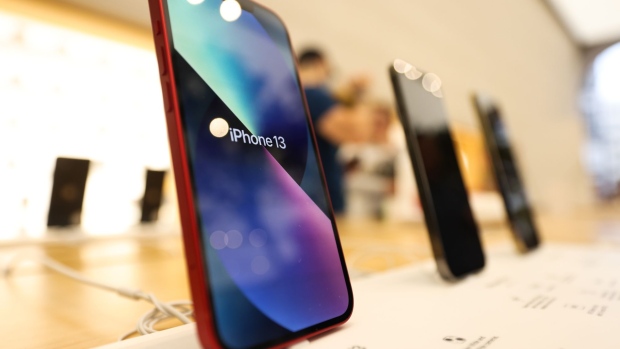 A display of iPhone 13 smartphones in the Apple Inc. store on Regent Street in London, U.K., on Friday, Sept. 24, 2021. Apple is releasing its iPhone 13 lineup on Friday, testing whether new camera technology and aggressive carrier deals will get shoppers to snap up a modest update of last year's model. Photographer: Chris Ratcliffe/Bloomberg , Bloomberg

Net income for the third quarter ending in September was NT$37 billion ($1.3 billion), the Taiwanese company said Friday in a statement. Analysts had estimated NT$32.4 billion on average. Sales for the period reached a record NT$1.4 trillion based on previously reported numbers.

Electronics manufacturers continue to benefit from the pandemic, which has fueled demand from homebound consumers. While a persistent shortage of semiconductors is curtailing companies’ production capacity, Apple Chief Executive Officer Tim Cook said late last month that demand for the U.S. giant’s offerings is “very robust.”

Hon Hai predicted that its business will wane this quarter from a year earlier -- led by declines in consumer electronics and computing -- signaling the company will continue to be affected by the semiconductor shortage. Apple said last month it could lose more than $6 billion in sales this quarter because of supply chain issues.

Lockdowns in Vietnam have affected the supply chain, but the situation in the Southeast Asian country has begun to improve, according to Hon Hai Chairman Young Liu.

Hon Hai has been working hard to cut its reliance on Apple’s gadget assembly orders. It is trying to branch out to the emerging electric vehicle market, although Liu has said the automotive business will not begin to make meaningful contribution to the company’s revenue before 2023.

In its most notable EV-related move to date, Hon Hai agreed in October to acquire Lordstown Motors Corp.’s pickup manufacturing facility in Ohio as part of a $280 million deal. Soon after, the Taiwanese company unveiled first electric cars, a move boosting its credentials as a serious contender for Apple’s secretive automotive project.

Hon Hai said Friday it will start assembling Lordstown Motors’ Endurance pickup truck in the second half of next year, which is later than initially planned. Also during the second half, it plans to start constructing an EV plant in Thailand and launch an EV project in the Middle East.

The company has a manufacturing deal with Fisker Inc. and a partnership with Thailand’s state-owned conglomerate PTT Pcl. It’s also struck pacts with Stellantis NV and Zhejiang Geely Holding.