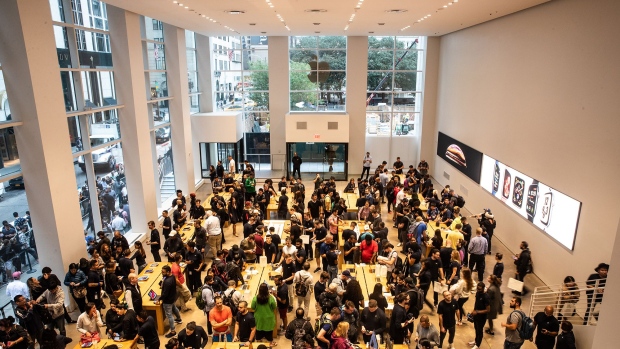 Employees assist customers with Apple Inc. products during a sales launch at a store in New York. , Photographer: Jeenah Moon/Bloomberg

Apple Inc.’s new iPhones will help the technology giant return to growth in the key holiday period, supported by a growing collection of other products and services.

The shares rose, but gains were limited. Optimism was tempered by falling revenue in many markets outside the Americas, a weaker performance from the Mac computer division and a surge in the stock ahead of the results on Wednesday.

Fiscal first-quarter sales will be US$85.5 billion to US$89.5 billion, the Cupertino, California-based company said in a statement. Analysts were looking for US$86.5 billion, according to data compiled by Bloomberg.

Chief Executive Officer Tim Cook said “we’re very optimistic about what the holiday quarter has in store.” During a conference call with analysts, the CEO went further by saying early trends looked very good based on the uptake of the new phones. "You can tell from the guidance we are bullish," he added.

“This was a strong quarter and this should silence some of the concerns out there regarding the iPhone,” said Shannon Cross of Cross Research. “The guidance was also strong.”

Apple shares rose about 2 per cent in extended trading on Wednesday. The stock closed at US$243.26 in New York earlier on Wednesday, leaving it up more than 50 per cent this year.

While Apple has developed different devices and new digital services in recent years, it still relies on the iPhone for more than half of its revenue and profit. The handsets are also the hub for the company’s other offerings, so investors remain transfixed by the fortunes of the iconic device.

Analysts had become increasingly bullish on iPhone 11 sales. Apple cut some prices and has offered more attractive trade-in deals. And there are hundreds of millions of aging iPhones that will need to be upgraded soon. Still, a trade war between the U.S. and China has sparked concern that Chinese consumers may favor domestic smartphones over Apple’s product. And lower iPhone prices have some analysts worried that revenue growth will be harder to come by.

The latest iPhones and Apple Watch went on sale on Sept. 20 and the quarter ended on Sept. 28, so Apple’s fiscal fourth-quarter results included some early sales of these devices.

The company said it sold US$33.4 billion worth of iPhones in the quarter, beating analysts’ estimates of US$32.3 billion, but still down from US$36.8 billion in the year-ago quarter.

The Wearables, Home, and Accessories segment, which includes the Apple Watch, AirPods, HomePod, Apple TV, and Beats headphones, generated US$6.5 billion in revenue, an increase of 54 per cent, easily topping Wall Street estimates.

The Services division is growing at a faster rate. This quarter, revenue jumped 18 per cent from a year earlier. In the fiscal third quarter sales rose 13 per cent.

Apple Arcade, the company’s video game service, launched on Sept. 19 with a one month free trial, so Apple did not generate any revenue from the US$4.99-a-month offering in the fiscal fourth quarter. Apple TV+ launches Nov. 1, while the Apple Card and Apple News+ launched earlier this year.

Still, sales fell in several areas outside the U.S. In China, revenue slipped 2 per cent to US$11.1 billion. Sales in Japan and Europe also declined.

Apple said it generated US$7 billion in revenue from the Mac segment. That was down 5 per cent and missed Wall Street expectations.