Apple's innovation today is in privacy and security: Roger McNamee

Apple Inc. (AAPL.O) and Qualcomm Inc. (QCOM.O) have spent two years fighting around the globe over how much the chipmaker can charge for iPhones that use its patented technology, with neither landing a decisive blow. That could change with a trial starting Monday in San Diego.

For the first time, a federal jury will decide if Qualcomm’s business model is legal and whether Apple had the right to stop paying royalties for the technology.

An out-and-out victory for either side could force the loser into concessions to settle the conflict that has spawned dozens of lawsuits on three continents. The outcome of the trial is so important that Apple Chief Executive Officer Tim Cook is expected to be called to defend the company’s business strategy and explain its relationship with Qualcomm, in what would be his first public appearance in a courtroom to discuss the issues underlying the fight.

Apple, with roughly US$245 billion in cash, will be able to shrug off any damages awarded. On the other hand, if Qualcomm’s hometown jury finds that the chipmaker has abused its market dominance to demand excessive royalties from phone makers, it may be forced to abandon a licensing model that has allowed it to grab as much as 5 per cent of the net selling price of every smartphone sold.

“From an investor perspective, there’s going to be a bigger focus on the Qualcomm side because a big part of their business is royalties,” said Shannon Cross of Cross Research LLC. “From an Apple perspective, investors just want to know Apple has access to the latest technologies.”

Looming beyond the trial is the global race to develop smartphones and other devices that can connect to up-and-coming 5G networks -- the successor to the current top-of-the-line mobile network that promises to usher in a world of innovation. Over the next year, 5G will expand across the U.S.’s major carriers into more areas, enabling faster internet speeds. The problem for Apple is that Qualcomm is currently the market leader in 5G modem technology, and Intel Corp., its current supplier for 4G chips, won’t have 5G modems on the market until next year.

Sorting out the issues with Qualcomm could help Apple bring 5G devices to the market more quickly than it would be able to otherwise. Longer term, it would also allow Apple to source the key component from more than one supplier, a practice Apple has said it prefers to single-sourcing parts.

“If Apple and Qualcomm come to some sort of resolution, Apple would be able to get a second source for modems and have 5G technology along with everyone else,” said Cross. “Apple typically is somewhat a follower in technology because they don’t want to launch something first that doesn’t work properly.” 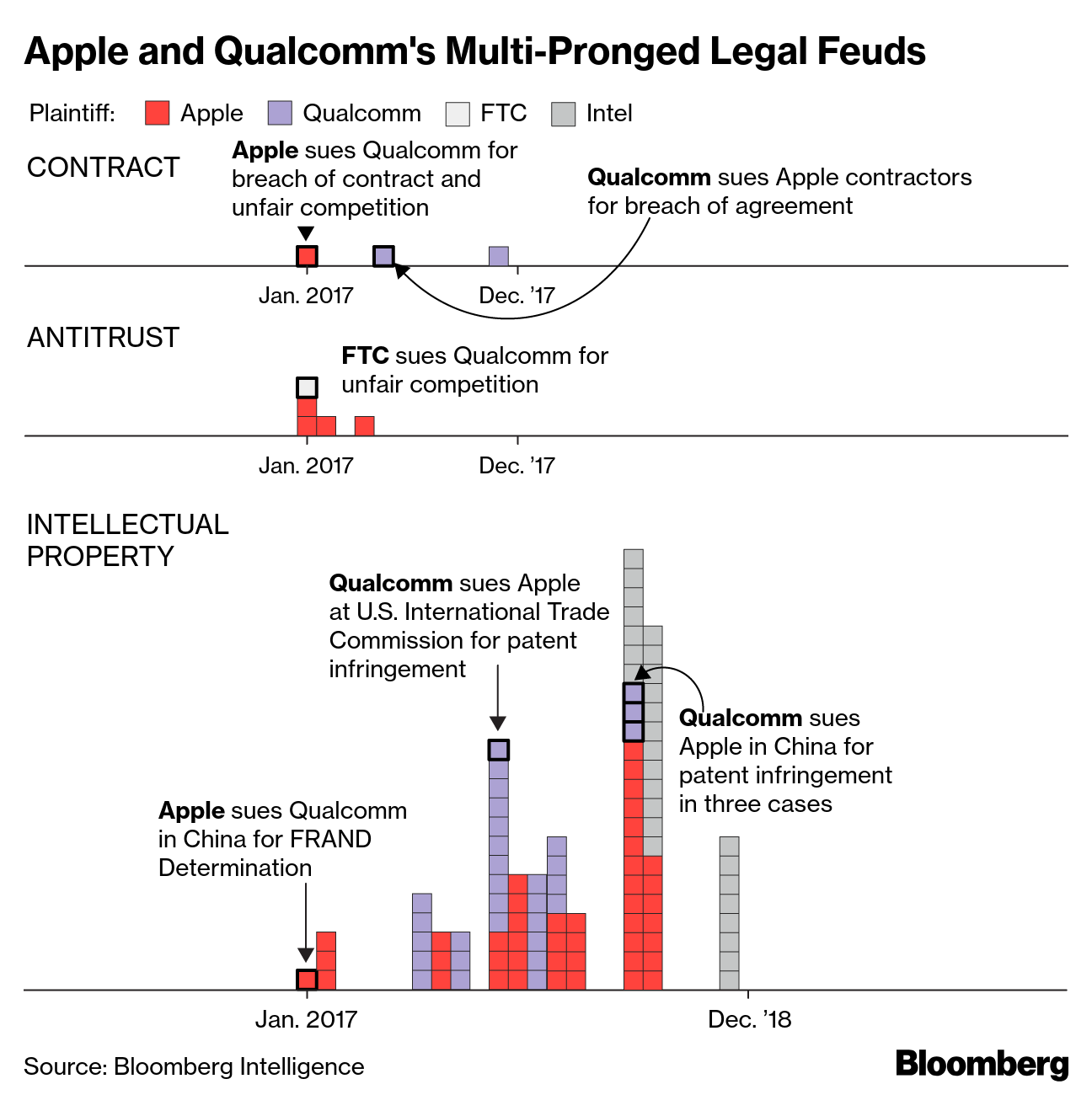 Qualcomm had already lost about US$7 billion in revenue as of October last year because Apple’s Asian manufacturers, including Foxconn Technology Group, stopped making royalty payments in 2017 for iPhones and iPads they assemble. Apple doesn’t have a direct licensing agreement with Qualcomm -- it hasn’t paid Qualcomm directly -- and instead reimburses its manufacturers who pay Qualcomm through separate contracts. The group of manufacturers also includes Compal Electronics Inc., Pegatron Corp. and Wistron Corp.

The chipmaker will try to convince the jury that the Asian manufacturers are liable for breach of contract and that Apple is liable for maliciously interfering with their contracts. That could entitle Qualcomm to punitive damages on top of billions of dollars in compensation for unpaid royalties.

Apple and its suppliers will argue that the contracts are unenforceable because they violate antitrust law as well as Qualcomm’s obligation to provide licenses on “fair, reasonable, and non-discriminatory” terms. Such FRAND terms apply to standard essential patents for technology that is widely adopted to ensure compatibility among, for example, wireless devices and networks.

“Qualcomm enters trial needing to win on both the antitrust issue, and on the issue of whether it complies with its commitment to license standard-essential patents on FRAND terms,” said Tamlin Bason, an analyst at Bloomberg Intelligence. “A loss on either could dent its licensing model, while a win on both would likely bring Apple to the negotiating table.”

In addition, Qualcomm faces as much as US$9 billion in possible damages from the Asian manufacturers, who claim they were forced for years to overpay for their licenses. Those damages can be tripled by the judge under antitrust law.

Apple’s arguments echo those of the Federal Trade Commission and other antitrust regulators in Asia and Europe that Qualcomm uses its dominant market position as a supplier of baseband chips, which enable mobile phones to connect to telecom networks, to demand excessive payments for the use of the patented technology.

Qualcomm is awaiting a ruling on the FTC’s antitrust allegations after a bench trial in San Jose, California, in January before U.S. District Judge Lucy Koh. Apple and its manufacturers have said that if Koh issues a ruling against Qualcomm in the FTC case, they will try to use that in the San Diego trial.

As part of a series of agreements that made Qualcomm the exclusive supplier of baseband chips for the iPhone, Apple negotiated a US$7.50 royalty rate per phone. The manufacturers paid Qualcomm a much higher rate under their contracts. Qualcomm then made quarterly payments to Apple to make up the difference. Qualcomm has disputed Apple’s description of those payments as “rebates.”

Qualcomm cut off the quarterly payments to Apple in 2016. The chipmaker alleged Apple had breached their agreements by instigating government antitrust investigations of Qualcomm, including in Korea where it was hit with a fine of US$853 million that year. Apple meanwhile has switched over to Intel as its supplier of baseband chips.

Among the anti-competitive claims Apple and its manufacturers have made against Qualcomm are that the chipmaker refuses to sell its chips without a license to use its technology. This, they allege, means that the manufacturers have no choice but to pay top dollar for a broad portfolio of patented technology, whether or not that technology is used in the phones they make.

Since Qualcomm is the biggest maker of CDMA and premium LTE modem chips, the manufacturers have had to acquiesce to its licensing demands, they say.

Qualcomm argues that its contracts with phone makers are negotiated in good faith and that it has signed more than 300 such licensing agreements. Many of the agreements include tens of thousands of patents covering video and audio playback technology that isn’t subject to FRAND terms. Competitors such as Intel aren’t required to take licenses, meaning that there’s no double fee if they choose to get their chips elsewhere, it said.