Apple Inc. shares rallied the most since May as pre-order data showed the iPhone 14 Pro Max was the best selling model, surpassing what the older version did in a similar timeframe.

Shares of the tech giant rose 3.9 per cent, their biggest one-day gain since May 27, and the stock closed above its 200-day moving average for the first time since August. Analysts from JPMorgan to Barclays wrote that the data point to strong demand for the latest mobile phone series, which was unveiled at its product launch event last week.

“Pre-order data shows that the iPhone 14 Pro Max is the best-selling model, and that it is doing better than the iPhone 13 Pro Max did at this point,” KGI Securities analyst Christine Wang wrote in a report. The pricing of the iPhone 14 series is positive for its future sales, she added. 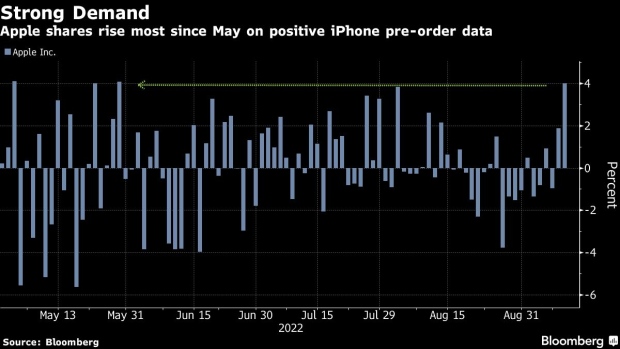 At its biggest product launch of the year, Apple introduced the iPhone 14, fresh AirPods Pro earbuds and new Apple Watch models. The iPhone retains the general look of the older version while getting camera enhancements and a long-anticipated satellite-messaging feature. The bulk of the iPhone upgrades are coming to the higher-end Pro line. Those devices will get a 48-megapixel camera and a screen that’s capable of always staying on in a low-power mode, similar to recent versions of the Apple Watch.

Apple is the top performing megacap technology stock this year, because investors have faith in its ability to tap into its more than 1 billion customers to earn more on its services including apps, video, fitness and gaming subscriptions. The next catalyst for the stock will be earnings for the September quarter, which is expected in late October.

Its shares are about 8 per cent lower this year compared with the Nasdaq 100 Index, which has slumped about 22 per cent. About 96 per cent of the 50 analysts covering the stock recommend either buying Apple shares or holding on to their positions, while only two suggest selling, according to data compiled by Bloomberg.