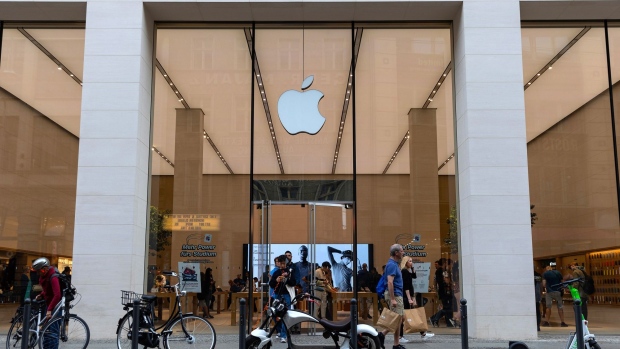 Employees assist customers at an Apple Inc. store in Munich, Germany, on Saturday, June 10, 2022. Confidence in the German economy improved a little, while remaining depressed, as fewer investors predict the outlook will deteriorate further in the face of record inflation and the war in Ukraine. Photographer: Krisztian Bocsi/Bloomberg , Bloomberg

(Bloomberg) -- An Apple Inc. retail store in St. Louis withdrew its petition to unionize, dealing a setback to the labor movement’s efforts to gain sway over the world’s most valuable company.

The International Association of Machinists and Aerospace Workers, which had been working to represent the store, blamed “anti-union practices and increased hostility towards workers” in making the move to drop the petition. “The IAM will continue to ensure that all labor laws are followed and remain hopeful that Apple workers will get the respect and dignity they deserve,” the group said in a statement Wednesday.

The St. Louis store becomes the second Apple location to abandon a unionization drive. A vote at a store in Atlanta was scrapped as well, with the union claiming that pressure from Apple prevented a fair election. But labor groups have made inroads elsewhere. An Oklahoma City site voted to unionize last month, becoming the second to do so among Apple’s roughly 270 US outlets.

The IAM had filed a petition last week with the US National Labor Relations Board on behalf of the St. Louis store, seeking to represent around 80 employees. If the agency had held an election and the union won, the company would have been legally obligated to negotiate over working conditions at the store.

At the time, the group filed a separate claim against Apple with the NLRB, accusing the company of violating federal law by holding mandatory anti-union meetings, threatening retaliation and telling staff that organizing would be futile.

Apple has said previously that it disagrees with these allegations.

The tactics ultimately prevented the St. Louis election from being able to proceed, according to the labor group, which represents a broad swath of workers in aerospace, health care and other industries. “Apple has chosen the route of disenfranchising its workers and their right to enjoy the benefits of having a union,” the IAM said in Wednesday’s statement.