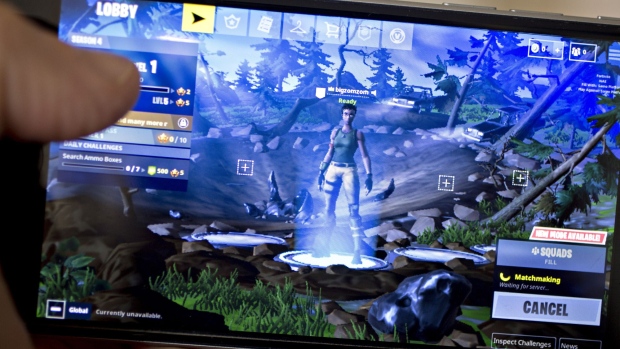 The Epic Games Inc. Fortnite: Battle Royale video game is displayed for a photograph on an Apple Inc. iPhone in Washington, D.C., U.S., on Thursday, May 10, 2018. Fortnite, the hit game that's denting the stock prices of video-game makers after signing up 45 million players, didn't really take off until it became free and a free-for-all. Photographer: Andrew Harrer/Bloomberg , Bloomberg

(Bloomberg) -- Apple Inc. plans to argue at a trial that developers and consumers will suffer if Epic Games Inc. succeeds in upending how the iPhone maker’s app marketplace is run.

Apple presented a California federal judge on Thursday with a road map of how it will push back against Epic in a high-stakes antitrust fight over how much the App Store charges developers. The filing comes ahead of a May 3 trial before the judge with no jury.

In a summary of its legal arguments, Apple contends the 30% commission it charges developers isn’t anticompetitive as it’s a standard fee charged by online and mobile app platforms.

Apple also repeats its criticism of how Epic launched the fight, accusing the Fortnite game maker of mounting a carefully planned public relations campaign -- with the hashtag #FreeFortnite -- in a bid to set up its own payment system and app store on the iOS platform. Epic has earned more than $700 million in revenue from iOS customers during the two years that Fortnite was available on the App Store, according to Apple.

Epic wants no restrictions on apps, whether on technology or content, accessed through the App Store, Apple said in its filing. But Epic overlooks the benefits of Apple’s app review process such as controlling malware attacks on the iOS platform that have helped developers and consumers, Apple said.

Apple Chief Executive Officer Tim Cook and Epic CEO Tim Sweeney are among company executives that will testify at trial. Both companies have also engaged a small army of economists to lay out their positions to the judge.