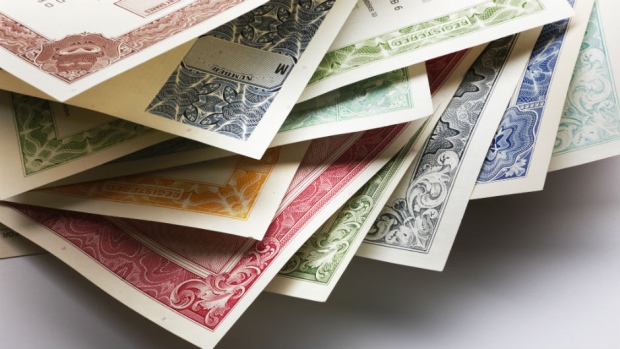 Apple Inc.’s (AAPL.O) surprise foray into Canadian-dollar debt has pushed corporate issuance to a near-record with more companies expected to beat a path north in search of attractive borrowing rates.

Foreign companies issuing in loonies have sold about $15.2 billion worth of debt this year -- the busiest year for Maple bonds since 2007. That’s helped drive sales in the Canadian market to about C$70.3 billion this year, just shy of the $71.4 billion record set in 2013 for the same period, according to data compiled by Bloomberg.

“The number one key driver has been the Maple market,” Steve Halliday, deputy chairman of fixed income at Toronto-Dominion Bank’s TD Securities, said by phone. The bank is the top seller of Canadian corporate bonds this year, according to data compiled by Bloomberg. “The Canadian market is pricing at global levels so for large, multinational companies that have access to global markets in many different currencies, the Canadian market is competitive.”

In addition to Apple, multinationals issuing Canadian-dollar debt for the first time have included PepsiCo Inc. and United Parcel Service Inc. Enticed by attractive currency swap spreads, they’re helping fill a gap left by Canadian banks, which are increasingly heading to the U.S. and Europe to borrow. No matter where they’re funding, companies share one impetus: locking in cheap borrowing before central banks in Canada and the U.S. raise benchmark interest rates again.

Cupertino, California-based Apple was able to sell $2.5 billion of seven-year debt this month at a spread of 10 to 15 basis points tighter than in U.S. dollars on a swapped-equivalent basis, Liam O’Sullivan, a portfolio manager for RP Investment Advisors, which has $4.3 billion in assets, said by phone from Toronto.

“I think that’s a green light to any large, sophisticated U.S. issuers that want to diversify their funding program,” he said. “I think they will look at the Apple transaction and think maybe this Canadian market is worth looking at.”

Investors will be keeping an eye on U.S. banks with outstanding Maple bonds that need to be refinanced, either in Canada or elsewhere, this fall, Sue McNamara, fixed-income portfolio manager at Beutel Goodman & Co. who helps manage $13 billion, said by phone from Toronto. The sweet spot for issuers on a swap basis seems to be around the seven-year part of the yield curve, and if that continues to be more attractive for U.S. issuers in Canada, more Maple bonds can be expected, she said.

“I’m sure every dealer is circling about 20 to 30 names in the U.S. that they’re phoning and saying, ‘Hey, would you consider issuing in Canada? Look what Apple did,’” she said.

To be sure, investors expect the Bank of Canada to raise interest rates 25 basis points for a second time this year in October, and that will have consequences for how and when foreign issuers choose to sell debt, McNamara said. Some of the fall supply may have already been pulled forward ahead of the central bank, she said. Overall corporate supply will be similar to last year’s roughly $94 billion, McNamara said.

But TD sees issuance levels likely exceeding 2016 volumes as regular fall issuers, such as utilities, return to the market, along with some new players.

“I think it’s going to be a busy fall,” Halliday said. “I think there is a possibility, particularly if we see some bigger trades continue in the Maple space, to surpass it.”