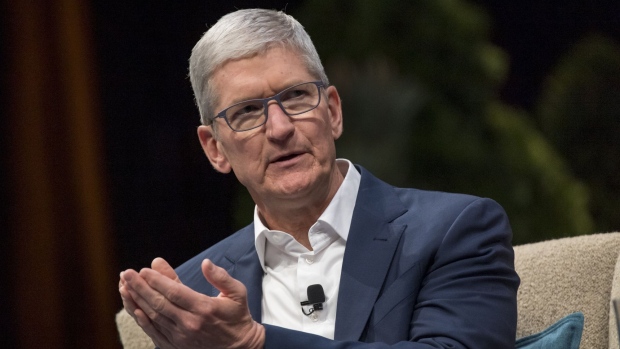 Tim Cook, chief executive officer of Apple Inc., speaks during a keynote at the 2019 DreamForce conference in San Francisco, California, U.S., on Tuesday, Nov. 19, 2019. Salesforce.com Inc.’s annual software conference, where it introduces new products and discusses its commitment to social causes, was interrupted for the second year in a row by protests against the company’s work with the U.S. government. , Bloomberg

(Bloomberg) -- Apple Inc. Chief Executive Officer Tim Cook fielded questions on mergers and acquisitions, the impact of Covid-19, and the company’s supply chain during a virtual shareholder meeting on Tuesday.

Narrating a slide show, Cook summarized many of the company’s new products and initiatives announced over the past year. He spoke about the latest iPhones and the growing potential of the Apple Watch, while noting that the AirPods Max headphones have quickly become “hugely popular” with users. He also discussed Apple’s efforts to combat the pandemic, climate change, and the San Francisco Bay Area housing crisis.

During a question and answer session, Cook said Apple is on track to meet its environment goals, including becoming carbon neutral by 2030 and transitioning its products to using recycled materials. He also reiterated Apple’s recent privacy changes, including an imminent plan to limit ad targeting on its devices.

Cook said the company bought almost 100 smaller companies over the past six years and makes a deal about every three to four weeks. Asked about gender pay equity, the CEO said Apple pays men and women equally across the world and has stopped asking applicants about their salary history to help ensure equity.

The Apple boss was also quizzed about supply chain diversification. Cook said Apple is always looking to improve and make changes across its business, without commenting specifically on any supply chain changes. Apple has been seeking to expand production outside of China, including in India and Vietnam, Bloomberg News has reported.

Cook also responded to regulatory scrutiny of the App Store, saying the service isn’t an antitrust issue. “Apple doesn’t have a dominant position in any market we compete in, not in any product category, not in any service category, and not in software or apps,” the CEO said. “This competitive marketplace pushes all of us to be better. So while scrutiny is always fair, accusations like these fall apart after a reasonable examination of the facts.”

As he has done before, Cook also suggested that he eventually wants staff to return to the office to improve collaboration. Still, he noted that the company was able to have a prolific past year working remotely.

Given the pandemic’s continued impact, Apple held its annual shareholder meeting online. Kate Adams, the company’s general counsel, oversaw the voting portion of the meeting. As is typical, all of Apple’s board members were re-elected and its auditor Ernst & Young was ratified.