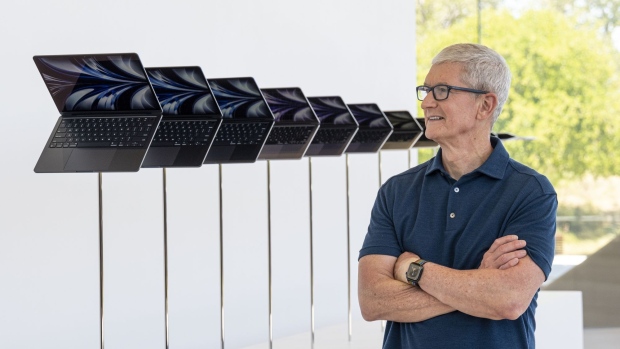 Tim Cook, chief executive officer of Apple Inc., next to a display of the new MacBook Air laptop computers during the Apple Worldwide Developers Conference in Cupertino, California, US, on Monday, June 6, 2022. Apple unveiled the most significant overhaul to its popular MacBook Air laptop in more than a decade, bringing a fresh design, new colors and a speedier M2 processor from its homegrown chip line. , Bloomberg

(Bloomberg) -- Apple Inc. Chief Executive Officer Tim Cook is in Washington to meet with top Republican lawmakers, according to people familiar with his visit, as the company seeks to forge ties with the GOP ahead of the party’s takeover of the House early next year.

Cook has scheduled sessions with Republican Representatives Jim Jordan of Ohio, Darrell Issa of California and Cathy McMorris Rodgers of Washington, according to two of the people familiar with the meetings, who asked not to be identified discussing private travel plans. Jordan and McMorris Rodgers are likely to chair the top committees overseeing the tech industry when the GOP retakes the House next year.

The meetings were likely scheduled weeks ago, far in advance of the diatrabe against the company launched by Twitter Inc. CEO Elon Musk. Still, Apple faces intensifying heat from conservatives. Some Republicans are rallying behind Musk, who on Monday attacked Apple and Cook in a series of tweets, claiming that the company threatened to remove Twitter from Apple’s app stores and paused its advertising on Twitter’s platform.

Musk claimed Apple was antagonizing Twitter over Musk’s “free speech” approach to leading Twitter, which he bought for $44 billion earlier this year. Critics have said Musk’s plan to pare back the rules governing speech on Twitter is leading to a spike in abuse, harassment and threats on the platform.

Jordan in particular has publicly aligned himself with Musk, periodically posting messages of support for Musk, who is also CEO of Tesla Inc.

Apple and the offices of lawmakers that Cook is scheduled to meet with didn’t immediately respond to requests for comment.

Jordan will likely chair the House Judiciary Committee when the GOP takes control of the House, while McMorris Rodgers is set to helm the House Energy and Commerce Committee. The two are in charge of forming the GOP’s tech policy agenda next year.

Cook, who has been making the rounds in Washington for months, is also scheduled to meet with Texas Republican Senator John Cornyn, as well as Democratic Senators Martin Heinrich of New Mexico and Brian Schatz of Hawaii.

Cornyn, one of the loudest China hawks in the Senate, has publicly criticized Apple’s ties to Beijing. Cornyn was one of several lawmakers who sent a letter earlier this year questioning Apple’s plans to use memory chips from a Chinese chipmaker.

Cook’s meetings are a continuation of Apple’s broader outreach in Washington as the iPhone maker has faced increasing scrutiny from policymakers over its tight control of the app store and extensive ties to China.