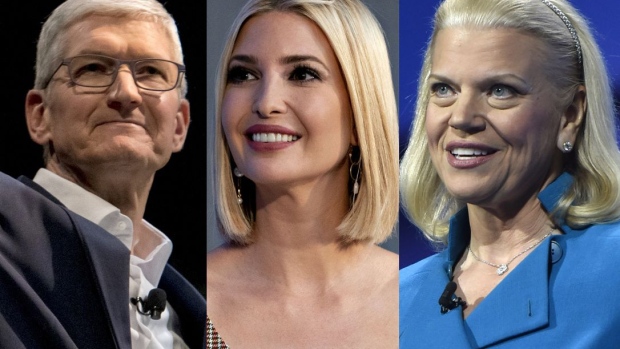 The campaign, backed by The Ad Council and a coalition of business supporters, will tout education and training opportunities for students and adults across the U.S. as the pandemic has left millions out of work and as Congress prepares for negotiations on a new round of aid.

Ivanka Trump, a senior aide to and a daughter of President Donald Trump, will join Cook and Rometty in a virtual roundtable event Tuesday. Ivanka Trump co-chairs the White House’s American Workforce Policy Advisory Board and has spearheaded its “Pledge to America’s Workers” program, in which firms make non-binding commitments to train staff.

“There has never been a more critical time for Americans of all ages and backgrounds to be aware of the multiple pathways to career success and gain the vocational training and skills they need to fill jobs in a changing economy,” Ivanka Trump said in a written statement.

The Ad Council launched the initiative Tuesday. Funding for the ad campaign is provided by 20 organizations including Apple, IBM, The Home Depot Inc., Lockheed Martin Corp. and others.

“Now more than ever, we need to ensure that everyone has the tools they need to succeed and seize new opportunities,” Cook said in the written statement announcing the initiative. “To invest in our future, we have to invest in people, in education and the many paths to a well-paying job or starting a new business.”