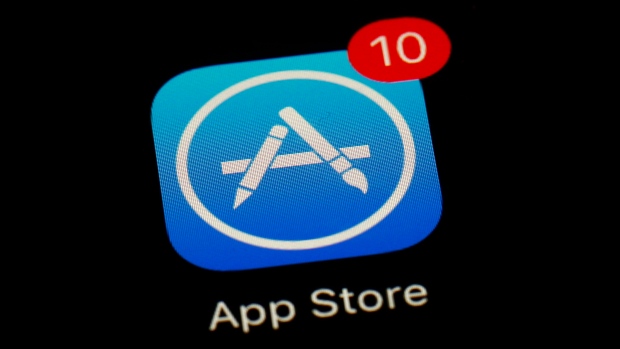 When consumers fire up the latest iPhones for the first time in the coming weeks, they’ll find the device brimming with Apple Inc.’s home-grown apps, already installed and set as default programs. This prized status isn’t available to outside software, making it hard for some developers to compete, and that’s catching the eye of lawmakers probing potential antitrust violations in the technology industry.

Being a default app on the world’s best-selling smartphone is valuable because consumers are subtly coaxed and prodded into using this more-established software rather than alternatives. For example, Safari is the iPhone’s default web browser, so when a user clicks a link to a website, it will automatically open there, even if other browsers are on the handset. 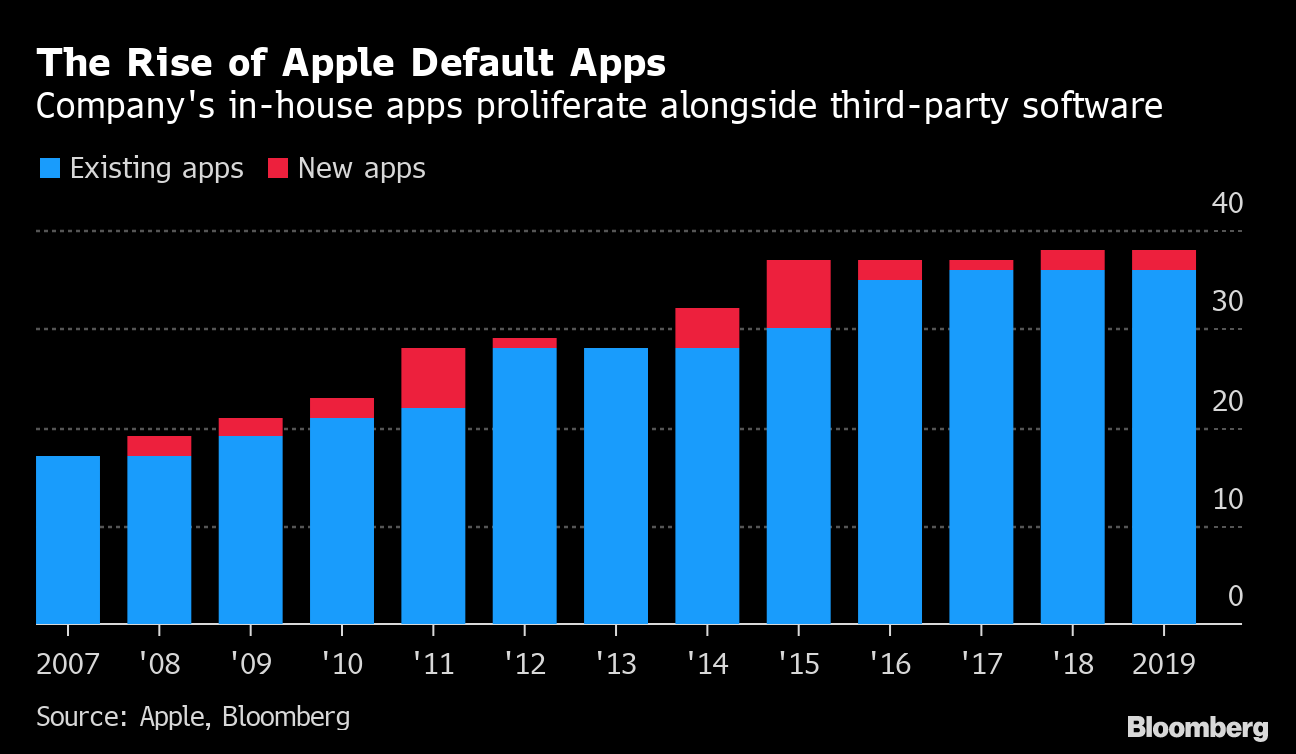 The issue has become more prevalent as Apple’s selection of apps has grown. In 2007, the iPhone had 17 pre-installed apps. Today, there are 38. And since the App Store launched in 2008, Apple has never let consumers set a third-party app as a default option, unlike on Android, Windows, and Apple’s own macOS computer operating system. Android users can pick Firefox as their go-to browser relatively easily, for instance.

A House antitrust panel wrote to Apple recently to demand executive communications relating to iPhone default apps. The lawmakers want to learn about the company’s policies on whether iPhone users can set non-Apple apps as defaults in categories including web browsers, maps, email and music.

“This sounds like Microsoft in the 90s,” said David Reichenberg, an antitrust lawyer at Cozen O’Connor. Back then, the U.S. sued Microsoft Corp. for trying to shut out other web browsers by bundling Internet Explorer with its Windows operating system and making it hard to install replacements.

Windows was much more dominant than Apple’s iOS mobile operating system, which has 35 per cent of the U.S. market for smartphones, according to International Data Corporation. However, Apple is a more-powerful player in the app market. In this first half of this year, Apple's App Store handled US$25.5 billion in consumer spending -- almost two-thirds of the total worldwide, according to Sensor Tower data. This gives outside developers little choice: They must be on iPhones to reach consumers – even if more of Apple’s in-house software stands in the way.

“Apple could and ultimately should allow third-party apps to have the same power as first-party ones,” said David Barnard, creator of Launch Center Pro, which competes against and works with Apple’s Shortcuts app. “I get there are security implications, but they’re not even allowing simple things that don’t impact security.”

Apple said new iPhones come with in-house default apps to create a seamless user experience, while improving performance, battery life, security and privacy. “We have also created the App Store, the safest place to get apps, so customers can choose from millions of apps to find the ones that further enhance their iPhone,” a company spokesman wrote in a statement. “In the few categories where Apple also has an app, we have many successful competitors.”

The company also noted that a recent review of Top Free section of the App Store showed that competitors across many categories are easily accessible and popular with consumers. 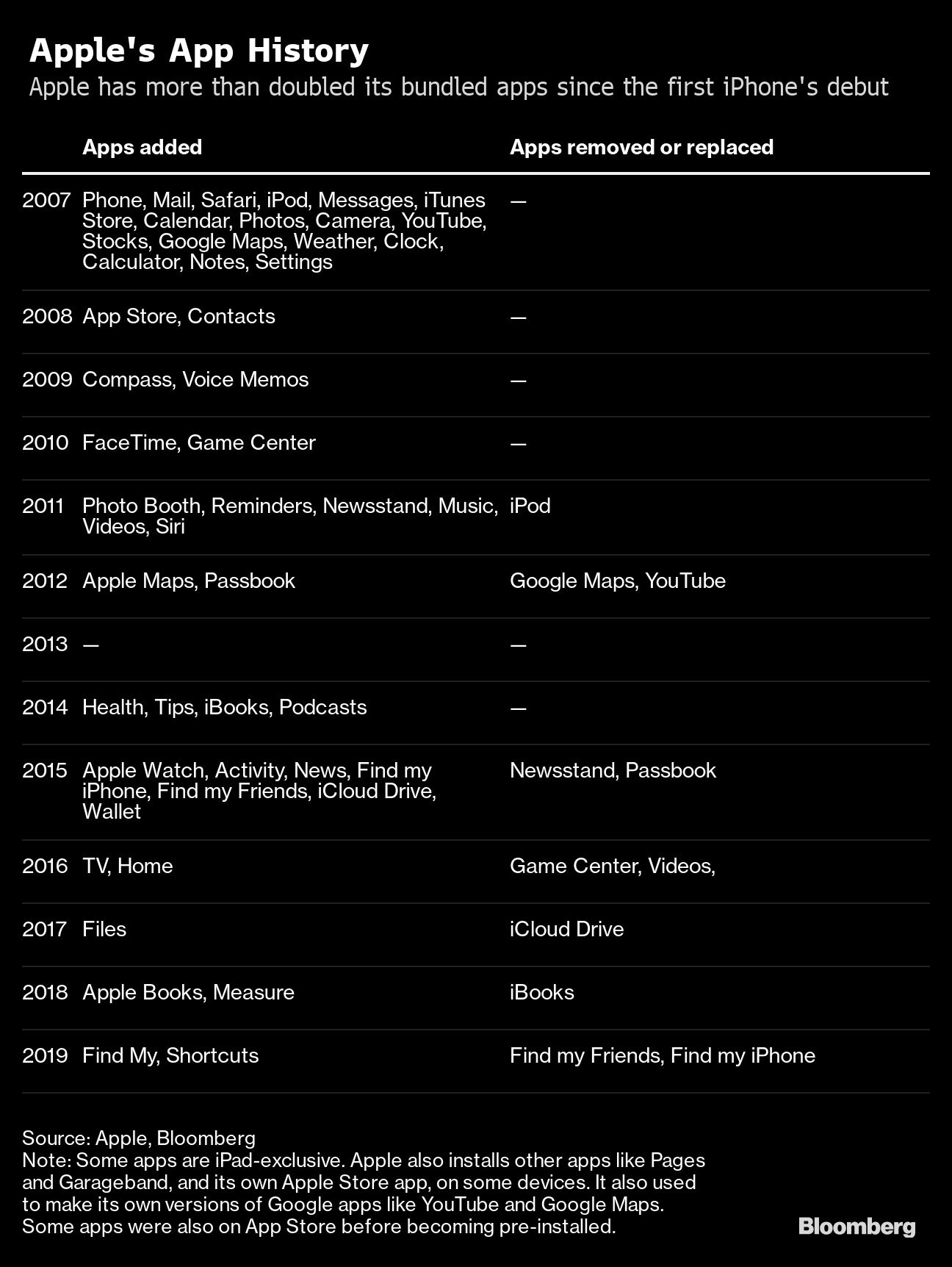 Read the full statement here, plus Apple’s plan to give outside developers more access via the company’s Siri digital assistant.

Home-grown iPhone software, such as Safari, Reminders, Mail, Notes and Podcasts, is also crucial to Apple’s fight for smartphone shoppers against Samsung Electronics Co. and other handset manufacturers. These rivals also pre-install their own apps. Google’s Pixel smartphones ship with nearly 30 default apps, and the Android operating system comes with a suite of Google software pre-loaded. Europe's antitrust regulator fined Google a record 4.3 billion euros (US$4.7 billion) last year for strong-arming device makers into pre-installing its Search service and Chrome browser, giving the company a leg up because users are unlikely to look for alternatives.

There's also a downside to giving outside developers more access: Many Android phones ship with apps from wireless carriers that users often don't want. Apple has barred these types of apps from being pre-installed on iPhones. The AT&T version of Samsung’s new Fold handset includes an app for DirectTV, while Android now comes with YouTube Music.

Still, Apple has not allowed third-party apps to become system defaults partly to thwart the encroachment of rival software, according to one executive who used to work at the company. In an interview this year, former App Store review head Phillip Shoemaker said the “number one fear” in the early days of the iPhone and the App Store was that major third-parties like Google or Facebook Inc. would create a suite of mobile apps that would replace those built by Apple. “There is now a conflict as Apple goes into these spaces that are ripe with competition,” he said. Apple says competition is alive and well on the App Store.

In 2016, Apple started letting iPhone users delete most of its pre-installed default apps. But while Apple Mail, Calendar and Music apps can be removed, third-party apps still can’t replace them as defaults. If a user deletes the Mail app and they go to send an email, they are prompted with a message to re-download the Apple email app, rather than use an already-installed third-party option like Microsoft Outlook.

Readdle, which builds iPhone productivity apps, said Apple not offering default status for third-party software degrades the user experience. “Even if you delete the Mail app, you still can’t set up a default email client, so if someone wants to use Spark, Superhuman, or Outlook, they should be given a choice,” Readdle marketing chief Denys Zhadanov said.

This issue manifests itself in several important app categories, including web browsing, email, and music. Similarly, competing apps in other categories, including mobile payments, coding and secondary displays, are limited by Apple keeping some of its device functionality exclusively for its own software.

Android is more flexible, giving outside developers more access. It offers a central panel in the settings menu to change system-wide default apps for the Google voice assistant, web browser, phone, messaging, and mobile payment apps. Android also lets users choose a default music service for the Google Assistant, so that users don’t need to specify which music service to play a particular song from. In a test on a Google Pixel 3 XL, users can also set a default maps app. When accessing email for the first time, any email app on the device can be chosen as the default. On other Android phones, the default apps page offers additional options to choose different camera, music, and photos apps.

Consumers sometimes prefer apps from third-party developers because they are often updated more regularly than Apple’s software, and sometimes have unique functionality that Apple doesn’t offer. Apple typically only issues major updates to its pre-installed apps when it releases new versions of iOS every September. Even then, some of Apple’s apps can often go multiple years without significant changes.

Some major app developers with several iPhone programs have begun building workarounds to set default apps within their own ecosystem. For example, an iPhone user can set the Gmail app to open all web links in Chrome and Google Maps. Google also offers buttons known as Extensions to access its apps via other third-party apps in the iPhone’s share menu.

Some developers blame the limitations of their iPhone apps on Apple keeping several Application Programming Interfaces to itself. APIs are crucial connections between operating systems and developers, providing access to the data and features that apps need to work well.

Only Apple can access the API needed to build reliable apps that turn iPads into second screens for Mac computers, according to developer Matt Ronge, who co-created Astropad and Luna Display, two apps that offer this feature. There are older APIs available, but they are inferior, making it hard for developers to compete with Sidecar, Apple’s own second-screen app, he said. Apple says it actively works to evaluate requests and feedback from developers.

Still, Apple makes many of its APIs public. For phone and video calling apps, developers get the same incoming call interface as Apple uses. When you want to make a call, third-party apps get equal billing alongside the default iPhone calling program. The iPhone’s standard Camera app also has hundreds of competitors that can access Apple hardware, such as sensors and machine-learning tools.