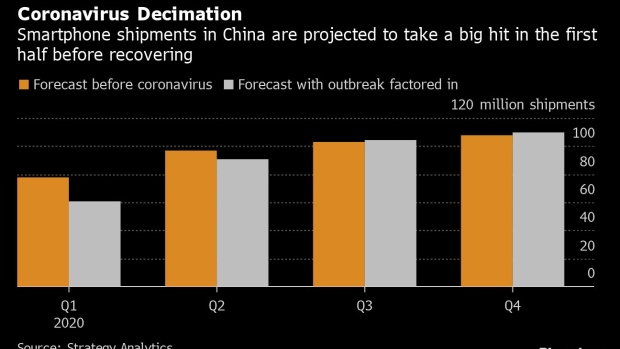 A woman wearing a protective mask uses a smartphone while holding balloons in front of an advertisement for Apple Inc. iPhone in Hong Kong, China, on Friday, Feb. 14, 2020. As fears of the novel coronavirus (Covid-19) spread across the region, pharmacies and supermarkets in Hong Kong are running out of basic supplies like toilet paper, paper towels, hand sanitizer and especially masks. Photographer: Justin Chin/Bloomberg , Bloomberg

(Bloomberg) -- For the second time in as many years, Apple Inc. has had to temper its sales outlook because of unexpected shifts in China, the country that’s served as the engine of its growth and success. First a trade war with the U.S. and now the outbreak of a novel coronavirus have called into question China’s role as a reliable market and supply chain partner for the world’s most valuable maker of consumer electronics.

The coronavirus that’s stifled China’s meticulously orchestrated production and logistics has hit both Apple’s supply and demand -- factories are resuming work slower than expected, the company announced, and most of its 42 stores in the country lie dormant -- illustrating how heavily exposed its business is to disruptions in the world’s most populous country. A fall in sales within China is likely to be the most immediate impact this quarter, while widespread production bottlenecks there risk hurting global iPhone revenue in subsequent months.

Amid its coronavirus troubles, Apple has been preparing to launch a new low-cost iPhone at around $400, Bloomberg News has reported. The model is still on track to launch in March, though the plans are still fluid, according to people familiar with the matter. Apple has also been preparing updated iPad Pro models with a new camera system for the first half of 2020 and the virus may yet impose delays or constraints on those plans.

Upon joining the company in the late 1990s, Chief Executive Officer Tim Cook transformed Apple’s supply chain into the efficient juggernaut that’s been the longtime envy of the industry. Products are manufactured in China with the help of low-cost, but skilled, labor and shipped around the world in a matter of days. Relying on Taiwan’s Foxconn Technology Group to run on-the-ground operations and China’s abundant investment in transport to ensure logistics, Apple has become a trillion-dollar company largely by selling made-in-China iPhones, iPads, Macs and accessories.

Responsible for millions of jobs in the country, Cook’s Apple has also garnered enough goodwill with the Chinese government to gain access to its market that is unmatched among U.S. tech heavyweights. Facebook Inc. and Alphabet Inc.’s Google are looking in from the outside, whereas Apple can sell all of its gadgets there. The Cupertino, California firm brings in more than $40 billion per year from Greater China, shy only of its takings from the U.S. and Europe. This strength is also the source of Apple’s vulnerability.

On Monday, Apple cut its earnings guidance for the quarter ending Mar. 31, which was already wider than usual because of the unpredictability of the coronavirus fallout. U.S. stock index futures and shares in Apple suppliers from Japan to Hong Kong fell after the outlook warning kindled concerns about the damage the epidemic is causing global corporations and the Apple ecosystem. Last year, the company adjusted earnings because of a shortfall in iPhone demand in China, which it blamed in part on the ongoing trade war between Washington and Beijing.

Production snarls at Apple’s main iPhone-making base of Zhengzhou may extend well into the June quarter and possibly beyond. Foxconn’s Hon Hai Precision Industry Co. only started seasonal recruitment on Monday, weeks behind schedule, and it’s been severely hindered by new policies intended to curb the spread of Covid-19 on campus. One recruiter, speaking on condition of anonymity, told Bloomberg News that the company was only hiring new workers from the local Zhengzhou area, tightening restrictions and eliminating the vast majority of available labor pool.

Implementing a rolling quarantine of up to 14 days for returning workers from more distant provinces, Foxconn faces additional challenges in managing the movement of untold numbers of staff. In Shenzhen, as many as 10 workers are packed in each dorm room as they endure their assigned sequester period. The available beds are running short as a growing number of workers travel back, according to one person who helped arrange the program.

Virus contagion has shuttered plants across China for weeks longer than anticipated after the Lunar New Year break, and the nightmare scenario feared by Foxconn and its ilk is the infection spreading across factory floors, which could potentially freeze parts of the supply chain and trigger cascading shortages. Apple’s facilities have all reopened, said the U.S. firm, but evidence on the ground suggests they’re still far from fully operational.

Existing iPhone inventories at retailers will soften the immediate blow of slower manufacturing, but analysts anticipate worldwide shortages will follow, extending the impact of the present disruption.

“I expect we’re going to start seeing iPhone shortages outside of China, which plays into the guidance,” said Apple analyst Shannon Cross from Cross Research. “In theory, it shouldn’t be demand destructive. It should just mean there should be a larger backlog of demand when these issues are resolved.”

The immediate reaction to Apple’s forecast cut has been a drag on Asian tech shares, especially those of suppliers to the company. But some impact on Apple was already widely anticipated.

“We’ve been getting nothing but headlines about the virus for weeks. Starbucks is closing its stores, Caterpillar is shutting its facilities. Company after company has been saying this,” Jim Paulsen, chief investment strategist at Leuthold Group, said by phone, expressing investor optimism for a fast turnaround. “We have been expecting bad sales headlines, this isn’t good, but it’s not surprising.”

Moving entirely out of China would be practically impossible for Apple in the short term, given the scale of its established network and the country’s incomparable ability to mobilize a workforce of millions. Similarly strong disruption threats to its supply chain arose in 2018 and 2019, largely spurred by trade war conflagrations, but Cook’s team has held steadfast in its commitment to the region and hasn’t shown any significant momentum toward a major move out.

“Apple’s supply chain in China is so tight and large, it would be difficult to replicate outside the region,” Cross said. “I think you’ll continue to see small expansions into India, but the vast majority of production will remain in China.”

Apple has indicated that its overall business is still strong, saying that it remained on track revenue-wise in regions outside of China for both products and services. The company is engaged in a long-term diversification shift that’s seen it pour billions of dollars into creating its own streaming content for Apple TV+ and building out subscription services like Apple Music and Apple Arcade. Its strongest step to reduce its China dependence to date has been this move to be less reliant on pure hardware sales for the bulk of its revenue.

Addressing the wider smartphone industry in China, Strategy Analytics this month projected a significant hit to shipments in the first half of 2020, to be followed by a recovery and a slight increase in shipments in the closing months of the year. If Apple follows a similar trajectory, it could see iPhone demand shift into later quarters rather than vanishing entirely.

“I think Apple remains in a very good position long-term,” Cross said. “I would assume there would be some pressure on the stock, but assuming this is a short term bump in the road, investors will look through it.”

To contact the reporters on this story: Mark Gurman in Los Angeles at mgurman1@bloomberg.net;Debby Wu in Taipei at dwu278@bloomberg.net;Gao Yuan in Beijing at ygao199@bloomberg.net

To contact the editors responsible for this story: Tom Giles at tgiles5@bloomberg.net, Vlad Savov, Edwin Chan