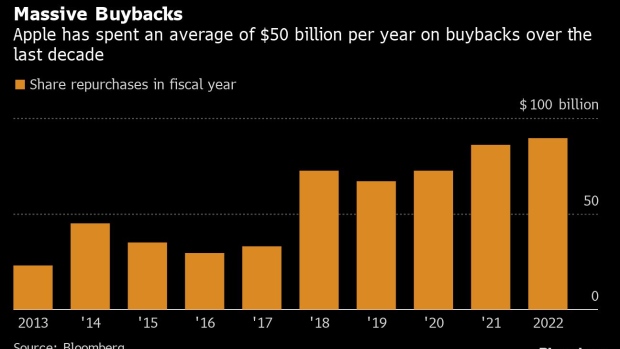 A display of iPhone 14 smartphones at the Apple Inc. Regent Street store in London, UK, on Monday, Nov. 7, 2022. Apple expects to produce at least 3 million fewer iPhone 14 handsets than originally anticipated this year, according to people familiar with its plans. , Bloomberg

(Bloomberg) -- Apple Inc. has shelled out more than $550 billion buying back its own shares over the past decade, more than any other US company, and the technology juggernaut shows no signs of slowing down.

Even with the stock under pressure the past few days because of production delays for its newest handsets, Apple has fared better than other megacap tech companies in this year’s bear market. Solid earnings and generous buybacks have become a central part of the investment thesis, making the stock more attractive during turbulent times.

“That’s how they get the safe haven, the gold standard view from investors,” said Gene Munster, who covered Apple during a 21-year career as an analyst before co-founding venture-capital firm Loup Ventures. “When they just keep showing up and generating the kind of cash they do and buying their own stock back, it sends a strong message and I think they’ll continue to do that as much as they can.”

The next signpost for investors about Apple’s appetite for its own stock will come in April, which is when the company typically tops up its repurchase authorization. It’s added $90 billion to the program in each of the past two years. It’s still generating the earnings to replenish its bank account: It was the only megacap to rally in the wake of its results this quarter, and the report kept analysts from dramatically slashing estimates, in contrast to widespread cuts at its peers.

Even with economies slowing around the world, demand is still strong for Apple’s most expensive iPhones, analysts say. The problem now is manufacturing delays because of Covid lockdowns in China, leading to what analysts say are record wait times for deliveries just as the holiday shopping season kicks off. While that may cause a short-term hit to revenue, there’s no sign it’s denting the longer-term case for the stock.

Apple accumulated cash for years under co-founder Steve Jobs, and Chief Executive Officer Tim Cook has been working on ways to better invest the money and return it to shareholders. Apple, which ended last quarter with $169 billion in cash and marketable securities, aims to have net cash -- cash minus debt outstanding -- of zero in the future.

“This is an aggressive bet that they made, something that Steve Jobs would have never done, and it’s paid off nicely for the company and its investors in part because the stock has done well during that period,” Munster said of the share repurchases.

Apple, the world’s largest company with a market value of almost $2.3 trillion, also is in a league of its own when it comes to share buybacks.

In two of the last five years, it has outspent the second-highest repurchaser by least $50 billion. It spent almost $90 billion last year, about equal to the market value of Citigroup Inc.

Investors like buybacks because they reduce a company’s share count and thereby provide a lift to earnings per share. The risk is that a company overpays, buying at a time when the stock is overvalued. Apple, though, says it’s paid an average price of $47 a share since it began buying back stock a decade ago, compared with the current share price of $143.63.

Apple has steered clear from using its cash pile to make large acquisitions, at a time when scrutiny of the size and clout of megacap tech firms is rising. Bulls say buybacks have been a good strategy for the company, until it turns its resources to a new product category like automotive, which could prove more capital intensive.

“In general, investors would like to see cash being used to generate growth,” said Lewis Grant, senior portfolio manager for global equities at Federated Hermes Ltd. “But when you look at a company the size of Apple and the amount of cash that we’re really talking about, deploying tens of billions of dollars every year to generate growth is perhaps overly ambitious.”

Apple also pays a cash dividend, but it’s almost an afterthought. The quarterly payout of 23 cents a share equals 0.6% of the stock price, one of the lowest yields in the S&P 500 index. Apple raised the payout by a penny in May and said it’s committed to annual increases.

However, investors don’t seem overly concerned how the company chooses to return capital, as long as they continue to do so.

“We actually don’t care which way you send the capital back to us,” said Mark Stoeckle, Adams Funds’ chief executive officer, adding that Apple would have to raise its dividend by “an enormous amount” to get to a yield that would matter. “We just don’t see that happening, so we’re just as happy with the stock buyback.”

Activision Blizzard Inc. analysts are growing more positive on the video-game maker, seeing value in the stock even as Microsoft Corp.’s planned acquisition looks increasingly dicey. At least six firms have upgraded their ratings in November, including three on Monday.

--With assistance from Tom Contiliano, Kit Rees and Ryan Vlastelica.