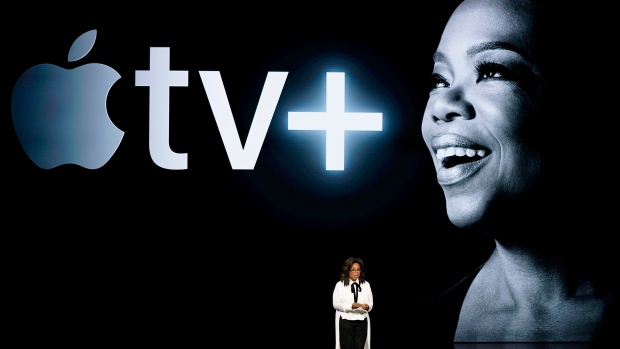 Oprah Winfrey speaks at the Steve Jobs Theater during an event to announce new Apple products in Cupertino, Calif. , The Canadian Press

Get ready, TV fans, because the next few months are going to be wild. Apple Inc. (AAPL:US), AT&T Inc. (T:US), Netflix Inc. (NFLX:US) and Walt Disney Co. (DIS:US) are spending billions of dollars on so much new streaming content that there will be little reason to leave your couch this winter – or to keep your cable subscription.

Apple gave a taste yesterday of what it’s been working on by releasing a trailer for “The Morning Show,” an original series that looks so good it could easily be mistaken for an HBO production. With an all-star cast led by Jennifer Aniston, Reese Witherspoon and Steve Carell, Apple is said to be spending US$300 million alone for the first two seasons. The company has committed a whopping US$6 billion overall to produce original shows and movies, according to the Financial Times, which would match what Netflix spent in 2017 and would also be in the same ballpark as Amazon.com Inc.’s expected content investment for this year. Other outlets have disputed that Apple’s budget is quite so large. Either way, it’s clear the iPhone maker is serious about streaming.

The Apple TV+ and Disney+ video-on-demand apps will both be available by mid-November, followed by AT&T’s HBO Max product. They are game-changers for the pay-TV industry, already littered with live-TV streaming products from Sling TV to YouTube TV.

Disney has spent about US$15 million per episode to make “The Mandalorian,” a live-action “Star Wars” series that will serve as the flagship of Disney+, according to the Wall Street Journal. That’s about US$120 million for the first season, which isn’t far from what Disney shelled out for “Captain Marvel,” the third-biggest movie of the year in terms of U.S. box-office ticket sales. The company expects to invest more than US$1 billion in original content for the app next year and another roughly US$1 billion for licensed content.

These streaming wars are risky. Studio owners generally have a sense of what a TV program could deliver in advertising revenue and how large of a theater audience a film might draw. But Disney+ will charge just US$7 a month and contain no ads. The company is betting it can build a large enough customer base so that all these pricey investments that have shareholders wincing right now will pay off some day.

In the Apple TV trailer above, Aniston’s character at one point says, “I just need to be able to control the narrative so that I am not written out of it.” It struck me as funny because that’s exactly what Disney and its peers are trying to do as they flood the market with content and turn a blind eye to the cost. Disney predicts it will have 60 million to 90 million Disney+ subscribers globally by the end of fiscal 2024, when the app finally begins making money. Analysts see Apple TV+ topping 100 million in the next five years, according to Bloomberg News. While both are starting from zero, they do have the advantage of strong, far-reaching customer relationships – Disney through its movies and theme parks, and Apple by physically being in most of our pockets already.

Netflix is protecting its turf by lighting it on fire. It’s projected to spend about $15 billion for in-house and licensed content this year while burning US$3 billion of free cash flow. The company paid US$100 million just to keep “Friends” on its platform through 2019. Even though the sitcom hasn’t aired new episodes in more than 15 years, it’s the second-most-watched program on Netflix. After this year, AT&T is reclaiming the rights to the show for its HBO Max product.

A little over a year ago, Casey Bloys, HBO’s programming chief, referred to such spending as “irrational exuberance.” But then earlier this year, his boss, HBO Chairman Richard Plepler, left the company in a shake-up by its new parent AT&T. HBO is now ramping up its production slate to reduce churn, or the rate at which bored subscribers are canceling, and HBO Max is reportedly paying US$425 million to carry “Friends” for five years starting in 2020. Likewise, the Wall Street Journal reported that Comcast Corp.’s NBCUniversal has its own US$500 million five-year exclusive rights deal for “The Office,” the No. 1 show on Netflix.

There is a potential fallacy in the companies’ thinking around these lavish deals: What if Netflix subscribers were streaming “Friends” and “The Office” for hours on end simply for background noise, something to mindlessly tune in and out of as they scrolled Instagram or did chores? In that case, perhaps users won’t necessarily miss those specific shows and won’t switch to other services at a rate that would come close to justifying nearly US$1 billion for two old sitcoms.

In any case, I keep writing about the frustration of needing to pay for and toggle between numerous apps just to access all your favorite content and the confusion that comes with doing so. It’s only going to get worse once Apple TV+, Disney+ and HBO Max launch. But at least there will be no shortage of stuff to watch, and with all this money being thrown around, you know it’ll be good.