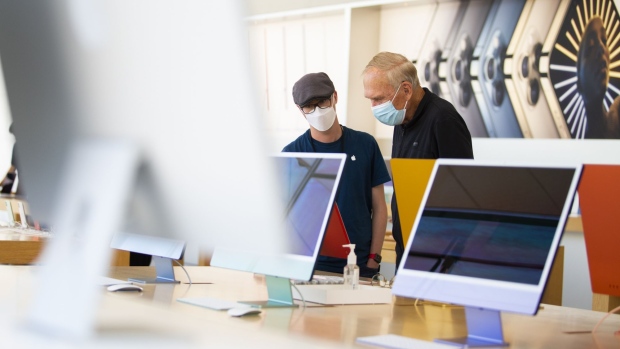 A customer wearing protective masks tries out the new Apple Inc. iMac computers at an Apple store in Palo Alto, California, U.S., on Friday, May 21, 2021. Apple Inc. rolled out the first redesign of its flagship desktop iMac computer in almost a decade, showcasing its latest machine with in-house designed chips instead of those made by Intel Corp. Photographer: Nina Riggio/Bloomberg , Bloomberg

(Bloomberg) -- Apple Inc. plans to drop its mask requirement for vaccinated customers at many U.S. stores beginning next week, a move that will mark yet another major retailer moving away from the Covid-19 safety protocol as states ease restrictions.

The technology giant has begun informing retail employees of the impending change in impacted markets, according to people with knowledge of the matter, who declined to be identified discussing policy changes that haven’t been announced. The change will go into effect as early as Tuesday, and employees have been told that they won’t be required to ask customers for verification of vaccination.

Workers will still need to wear masks at stores, Apple told staff. The company could change its plans or delay the loosening of the restriction. The requirement for face coverings will also be dropped at some of the Cupertino, California-based company’s U.S. offices, according to a memo sent to corporate employees.

“Given the progress being made in response to Covid-19 in the U.S., we wanted to let you know that a number of sites are now moving to the next phase of resumption and will begin to operate under Phase 3 onsite protocol,” according to the memo. “In Phase 3, where allowed, Apple protocols are being updated to permit optional masking for vaccinated individuals. Physical distancing requirements are also being relaxed in this phase.”

An Apple spokesman declined to comment on the changes.

Apple was one of the first companies to close its stores as the outbreak spread globally. In March 2020, it said it was closing hundreds of stores and encouraged employees to work remotely.

The planned change in the company’s mask policy change corresponds with California’s timeline to reopen the state on Tuesday and ease most restrictions for vaccinated individuals. Apple previously relaxed its mask requirement in some other regions, including in Australia.

The company told staff earlier this month that they’re expected to return to the office by September. It’s beginning its require office return as a hybrid pilot program that lets staff work from home two days per week and as many as two additional weeks remotely per year.