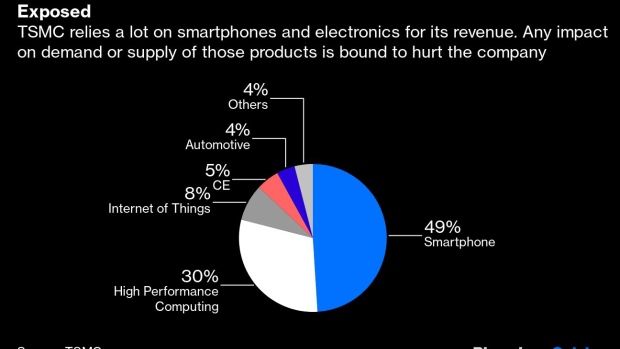 (Bloomberg Opinion) -- Apple Inc. has thrown out its March-quarter revenue guidance three weeks after providing it.

Despite factoring in possible downside from the China coronavirus outbreak in its original forecast, the iPhone maker realized that things have deteriorated much more than it had anticipated. It gave no new figure and merely said the old one no longer applies, an admission that the company really can’t quantify the impact.

While we should expect similar downbeat tones through the rest of the sector, this really means we should keep tabs on the one company that sits at the heart of the global technology supply chain: Taiwan Semiconductor Manufacturing Co.

Apple is TSMC’s largest customer. When the chipmaker gave its own first-quarter and full-year forecasts Jan. 16, the world had barely heard of the disease now riveting its attention.

Since then, Apple has shut stores in China and downstream assemblers like Hon Hai Precision Industry Co. have struggled to ramp up production after the Lunar New Year break amid continuing quarantines and a shortage of workers willing to return to the factory floor.

Nvidia Corp., which designs graphics chips, is another major client of TSMC. On Feb. 13, it said the virus had cut its forecast by $100 million. That’s only around 3% of expected revenue for the quarter, but it all eventually adds up. Alibaba Group Holding Ltd., not a direct customer, forecast a decline in revenue from its core businesses as consumers on its e-commerce platform shy away from spending. At least some of those lost sales will be electronics products, which use chips made by TSMC.

Chinese companies, including Huawei Technologies Co., accounted for 20% of TSMC’s revenue last year. With numerous enterprises in China on lockdown, adding to the squeeze on both demand and production, it’s unlikely such clients will be able to escape the impact.

And last week, wireless industry association GSMA scrapped its annual Mobile World Congress scheduled for Feb. 24 in Barcelona because most of its major participants had already pulled out. This isn’t a consumer event, but the cancellation shows the breadth and reach of the outbreak’s impact on business.

Whichever way you look at it, the global tech slowdown leads back to TSMC.

Revising guidance mid-quarter isn’t without precedent, and TSMC usually does with a statement filed mid-afternoon Taipei time. It did so a year ago this week, cutting its sales and profit outlook after facing troubles with chemicals used in the manufacturing process. The result was a 10% reduction in operating profit.

Just a few months before that, a production hiccup caused by a computer virus in its equipment hurt gross profit by around 5%. An earthquake four years ago sliced operating income by about 7%. The biggest mid-quarter guidance cut I could find is the 25% hit to operating profit that it took in December 2008 as the financial crisis brought the world economy to a halt.

To be sure, it’s not certain that a cut will be necessary this time. Clients may decide that they want to keep building up inventory of the chips that come out of TSMC’s factories. But at some point, end-demand may dictate a more cautious approach to procurement.

This epidemic is proving hard to quantify, so TSMC’s biggest challenge may not be whether to revise guidance, but what new number to give.