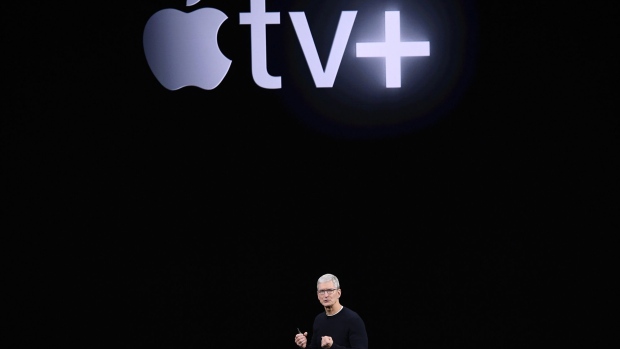 Tim Cook speaks about Apple tv+ during an event. , Bloomberg

Apple Inc. is considering bundling its paid internet services, including News+, Apple TV+ and Apple Music, as soon as 2020, in a bid to gain more subscribers, according to people familiar with the matter.

The latest sign of this strategy is a provision that Apple included in deals with publishers that lets the iPhone maker bundle the News+ subscription service with other paid digital offerings, the people said. They asked not to be identified discussing private deals.

Apple News+, which debuted in March, sells access to dozens of publications for US$10 a month. It’s often called the “Netflix of News.” Apple keeps about half of the monthly subscription price, while magazines and newspapers pocket the other half.

If Apple sold Apple News+ as part of a bundle with Apple TV+ and Apple Music, publishers would get less money because the cost of the news service would likely be reduced, the people said.

As the smartphone market stagnates, Apple is seeking growth by selling online subscriptions to news, music, video and other content. This month, it launched Apple TV+ for US$4.99 a month with shows from stars including Jennifer Aniston and Jason Momoa.

Bundling these offerings could attract more subscribers, as Amazon.com Inc.’s Prime service has done. Apple is already experimenting with this kind of approach. It recently began offering a free Apple TV+ subscription to students who are Apple Music subscribers. Still, the company’s plans may change, given how complex deals like these can be.

Some media executives say the amount they’ve received from Apple News+ so far has been less than expected. One publisher typically gets under $20,000 a month, less revenue than it saw from Texture, a previous iteration of the service that Apple acquired last year, one person said.

Apple News+ offers dozens of magazines, like the New Yorker, GQ and People, as well as major newspapers such as The Wall Street Journal and the Los Angeles Times. Bloomberg Businessweek, owned by Bloomberg LP, also participates.

It remains unclear whether publishers are seeing less revenue than they expected because Apple News+ has few subscribers, or because their content isn’t being widely read. Publishers share the remaining 50 per cent of the revenue based on how much time Apple News+ subscribers spend reading their articles. Apple has not revealed subscriber numbers for Apple News+. The company recently expanded the service to Australia and the U.K.

Advertisers have been less interested in Apple News+ because Apple’s restrictive data policy makes it difficult for marketers to target specific readers, one of the people said. Some publishers also would like Apple to share data about subscribers, like email addresses, which they could use to sell other offerings.

As part of the contracts, media companies have the right to pull their magazines or newspapers from Apple News+ after a year if they’re unhappy with the service, one person said.

The media industry was initially wary of Apple News+ before it launched, fearing their readers might cancel existing subscriptions and get their articles at a cheaper price from Apple. For that reason, some did not make all their articles or magazines available. Others, including the New York Times and the Washington Post, didn’t sign up.

Still, some news executives are pleased with how Apple News+ has gone so far.

“The financial results to date are consistent with our expectations,” Norm Pearlstine, the executive editor of the Los Angeles Times, said in a statement. “We are optimistic that they will continue to grow in the months and years ahead.”