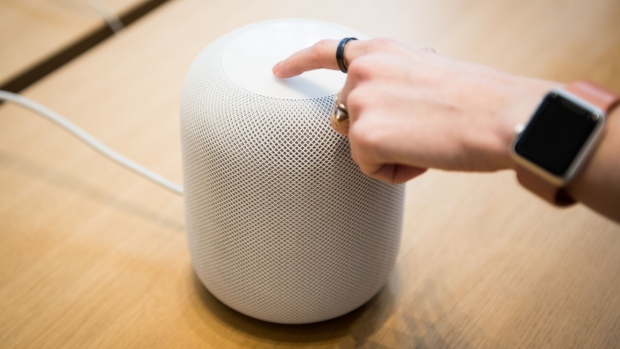 An employee demonstrates the HomePod speaker on the first day of sales at an Apple Inc. store in New York, Feb. 9, 2018. Bloomberg/Mark Kauzlarich

Apple Inc. is ramping up hiring for a team that is working on new smart-home software and devices in an effort to catch up in a field where Google and Amazon.com Inc. have dominated, according to people with knowledge of the matter.

The company is seeking engineers to work in its Cupertino, California, headquarters and in San Diego as part of a group revamping Apple’s smart-home platform.

The overhaul is designed to spur more outside accessory and appliance makers to connect smart-home products such as lights and garage doors with the iPhone and Apple’s voice-activated digital assistant, Siri. The team also is exploring the possibility of building new home devices beyond the HomePod speaker.

The effort is headed by Andreas Gal, the former Mozilla chief technology officer who joined Apple last year when his company Silk Labs was acquired by the iPhone maker. Gal is leading the software side of the team reporting to Arun Mathias, a lieutenant to software chief Craig Federighi, who oversees wireless software engineering. Silk Labs developed an artificial intelligence-based platform for linking together internet-connected devices.

Apple has posted 15 job listings on its website since last month for engineers to work on the company’s platform, called HomeKit, smart-home devices and related software and has shared other listings on third-party job boards. The company has also been privately recruiting potential candidates from the internet-connected devices industry. Apple already has hired several new engineers and managers this year from Amazon, Qualcomm Inc. and other companies.

An Apple spokeswoman declined to comment about the company’s plans.

Gaining a foothold in the smart-home market is critical for Apple as it looks for new offerings beyond the iPhone and seeks ways to keep people buying its products and services.

The company first dipped its toe into the area in 2014 with the launch of HomeKit, a Siri-connected platform that connects smart-home devices to Apple products like the iPhone, iPad, Apple Watch, and HomePod.

Apple offers a Home app on most of its devices, letting users lock and unlock doors, connect to sprinklers, open blinds, and control media on TVs and speakers using its AirPlay protocol.

Apple’s HomePod, its one home device other than the Apple TV, hasn’t gained widespread popularity with consumers due to its price, reliance on Apple services and smaller base of connectable smart devices.

Apple has focused on mobile devices like iPhones, iPads, and Apple Watches as well as computers, and Amazon and Google have shown little to no ability to compete with Apple in those areas.

Apple’s two smart-home devices compare with dozens of offerings like the Echo and Nest Hub Max from Amazon and Google, respectively.

More importantly, Amazon and Google’s smart-home ecosystems are far larger than Apple’s. Apple lists about 450 compatible HomeKit devices on its website from third-party device makers. Amazon says that Alexa works with 85,000 smart-home products from 9,500 manufacturers and that consumers have linked tens of millions of home devices to Alexa. Google says its home platform works with more than 10,000 devices from 1,000 brands.

Apple’s approval process for third-party accessories is known to be stricter than others.

Apple’s HomePod speaker has five per cent market share compared with 70 per cent for Amazon smart speakers and 20 per cent for Google speakers, according to Consumer Intelligence Research Partners.

The Apple TV set-top box, in addition to Google’s Chromecast, has fallen far behind Roku Inc. and Amazon in TV appliances.

In the overall smart-speaker market, according to International Data Corp., Apple has only two-per-cent share compared to 25 per cent for Amazon and 22 per cent for Google, including the companies’ own products and third-party devices. 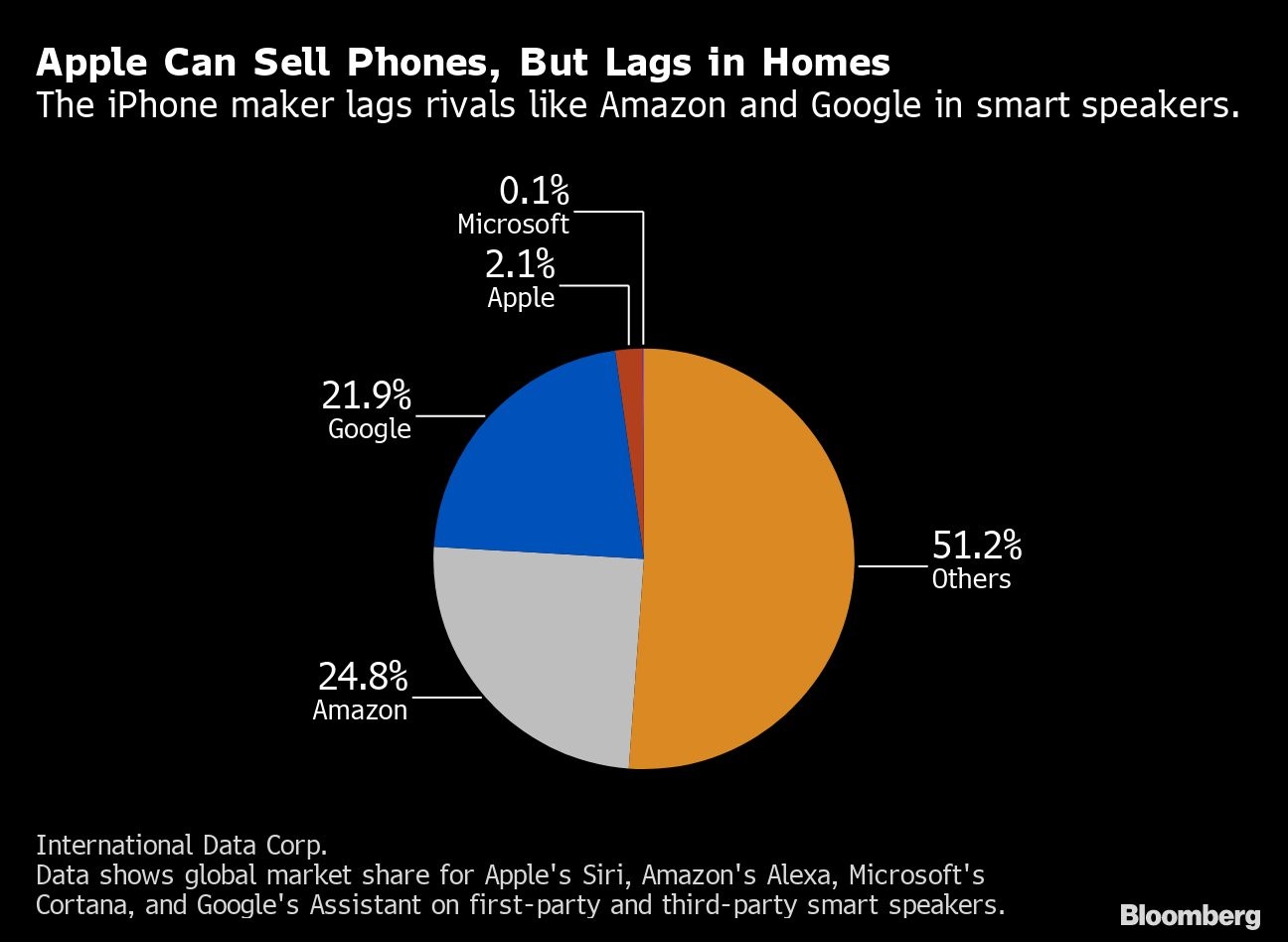 Apple has said it plans to release a new cloud storage feature for security cameras later this year, which could potentially play into the company’s future plans.

A few years ago, teams inside Apple explored creating a wide range of smart-home accessories, such as modules for opening and closing windows, cabinets, and doors, but those efforts were put on hold, according to a person with knowledge of the work.

Apple’s smart-home initiative is one of a few major projects underway at the company. Apple also has teams working on self-driving car technology, an augmented-reality headset that could debut as early as next year, an iPhone with support for 5G networks for next year and Mac computers that run on custom Apple chips rather than processors from Intel Corp.