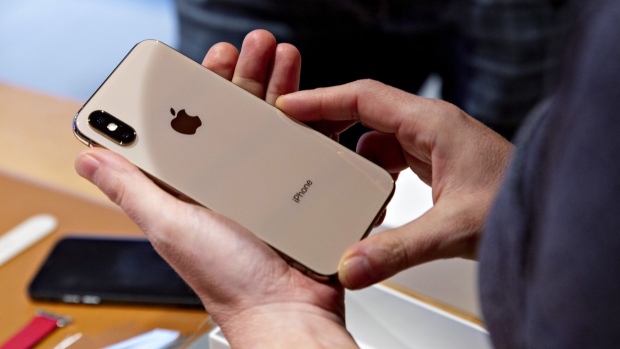 Apple Inc. pulled important app-development tools from Google after the iPhone maker decided the internet giant broke its rules, according to people familiar with the matter.

Facebook Inc.’s app development was hobbled in a similar way for about 24 hours, a sign that Apple is wielding power as operator of the most-lucrative U.S. app store to push its approach to user privacy.

Google employees can’t access test versions of iPhone apps they’re making, or use internal apps related to transportation scheduling and food, the people said. Security alerts are limited too, one of the people said. They asked not to be identified discussing private matters.

"We’re working with Apple to fix a temporary disruption to some of our corporate iOS apps, which we expect will be resolved soon," a spokeswoman at Alphabet Inc.’s Google said in a statement. Apple restored Facebook’s privileges on Thursday.

Apple offers an "enterprise certificate" that helps some companies work on iPhone apps without going through the usual app review process. Facebook and Google used this to collect data on user activity for internal research. When this was reported earlier this week by TechCrunch, both companies stopped the activity. Apple said Facebook had broken its rules and pulled the social-media company’s certificate until Thursday. It’s now punishing Google, too.

Google and Facebook rely on the enterprise certificate to test the iPhone versions of the apps they’re making. Without this option, some of the companies’ most important app-development work is disrupted. No public versions of the apps are affected. Many Google employees use Android devices, so Apple’s move was likely tougher on Facebook.

Apple didn’t respond to a request for comment. The company told a BuzzFeed editor that it is working with Google to "reinstate their enterprise certificates very quickly."

Apple’s actions may burnish the reputation for privacy it takes pains to cultivate among consumers, but the moves are risky, too. If popular apps, such as like Facebook’s Instagram and Google Maps, aren’t kept up to date on iPhones, consumers might switch to handsets that run on Google’s Android operating system.

Google and Facebook likely could have avoided these problems if their data collection apps were tied to different certificates and accounts from the ones the company uses to test App Store apps and run their own company operations. Google isn’t just a competitor -- it pays Apple billions of dollars each year to be the default search engine provider for the Safari web browser on iPhones, iPads, and Macs. It’s unclear how this will impact that deal when renewal discussions begin.

While both research programs let the internet giants track activity, Facebook’s was more invasive because the company could see much more traffic from users’ phones. The social-networking company also monitored teens, paying them US$20 a month if they signed up with parental consent.

Though there were differences in the kinds of data Facebook and Google collected, both companies clearly broke Apple’s rules, said Paulo Andrade, a software developer who builds apps for Apple operating systems.

Smaller developers have to play by Apple’s strict rules, so it’s encouraging to see the same ones applied to tech giants, he said.

“They have no problem flexing their power with us,” he said. “It’s a good sign. It’s Apple drawing the line with these big companies.”

Apple is dealing with its own privacy crisis after a bug let people to eavesdrop on each other over the company’s FaceTime video chat service.