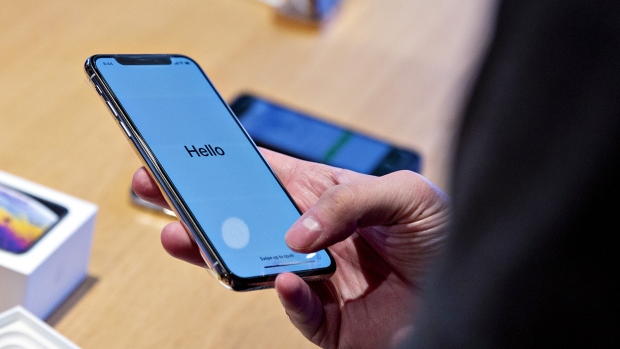 A customer views an Apple Inc. iPhone XS during a sales launch at a store in Chicago, Illinois, U.S., on Friday, Sept. 21, 2018. The iPhone XS is up to $200 more expensive than last years already pricey iPhone X and represents one of the smallest advances in the product lines history. But that means little to the Apple Inc. faithful or those seeking to upgrade their older iPhone. , Photographer: Daniel Acker/Bloomberg

In a copyright-infringement lawsuit filed Thursday in West Palm Beach, Florida, Apple said the software company Corellium has copied the operating system, graphical user interface and other aspects of the devices without permission, and wants a federal judge to stop the violations.

Apple said it supports “good-faith security research,” offering a $1 million “bug bounty” for anyone who discovers flaws in its system and gives custom versions of the iPhone to “legitimate” researchers. Corellium, the iPhone maker said, goes further than that.

“Although Corellium paints itself as providing a research tool for those trying to discover security vulnerabilities and other flaws in Apple’s software, Corellium’s true goal is profiting off its blatant infringement,” Apple said in the complaint. “Far from assisting in fixing vulnerabilities, Corellium encourages its users to sell any discovered information on the open market to the highest bidder.”

Corellium creates copies of the Apple iOS, and says that it’s all to help white-hat hackers discover security flaws. Instead, according to Apple, any information is sold to people who can then exploit those flaws.

Corellium, in a posting dated July 4 on its website, said it “respects the intellectual property rights of others and expects its users to do the same.” Officials with the Delray Beach, Florida-based company couldn’t immediately be reached for comment on the suit.

Corellium’s products allow the creation of a virtual Apple device, according to the suit. It copies new versions of Apple works as soon as they are announced, and doesn’t require users to disclose flaws to Apple, the Cupertino, California-based company said in the complaint.

“For a million dollars a year, Corellium will even deliver a ‘private’ installation of its product to any buyer,” Apple said. “There is no basis for Corellium to be selling a product that allows the creation of avowedly perfect replicas of Apple’s devices to anyone willing to pay.”

Apple said “enough is enough” when it comes to Corellium advertising its products, including ones that compete with the Apple Developer Program, according to the complaint.

“Corellium is indiscriminately marketing the Corellium Apple Product to any customer, including foreign governments and commercial enterprises,” Apple said. “Corellium is not selectively limiting its customers to only those with some socially beneficial purpose.”

In addition to an order blocking sales of the Corellium Apple Product, Apple wants a court order forcing Corellium to notify its customers that they are in violation of Apple’s rights, destruction of any products using Apple copyrights, and cash compensation.

To contact the reporter on this story: Susan Decker in Washington at sdecker1@bloomberg.net

To contact the editors responsible for this story: Jon Morgan at jmorgan97@bloomberg.net, Dan Reichl