Apple Inc. reported quarterly revenue that grew one per cent, but didn’t provide a forecast for the first time in more than a decade, sparking concern about performance later this year. The shares slipped 1.5 per cent in extended trading.

Chief Executive Officer Tim Cook said Apple experienced a “very depressed” period in late March and early April, in the depths of the COVID-19 pandemic, but saw a “pickup” in the second half of this month. The company also increased its share buyback plan by US$50 billion.

Fiscal second-quarter sales came in at US$58.3 billion, compared with US$58 billion a year earlier. That beat Wall Street estimates, according to data compiled by Bloomberg. IPhone revenue was US$28.96 billion, down 7 per cent, but also topping analysts’ expectations. Services sales jumped 17 per cent to $13.35 billion, while the wearables and accessories business climbed 23 per cent to $6.28 billion. The shares rose 1.2 per cent at 10:16 a.m. Friday in New York.

“The last part of March and the first part of April were very depressed and then we’ve seen a pickup relative to that period of time in the second half of April,” Cook said in an interview. “I would attribute that partially to the new products that we were able to launch at end of March and early April, the economic stimulus and probably some level of people getting a bit more used to that this is going to last a little while.” 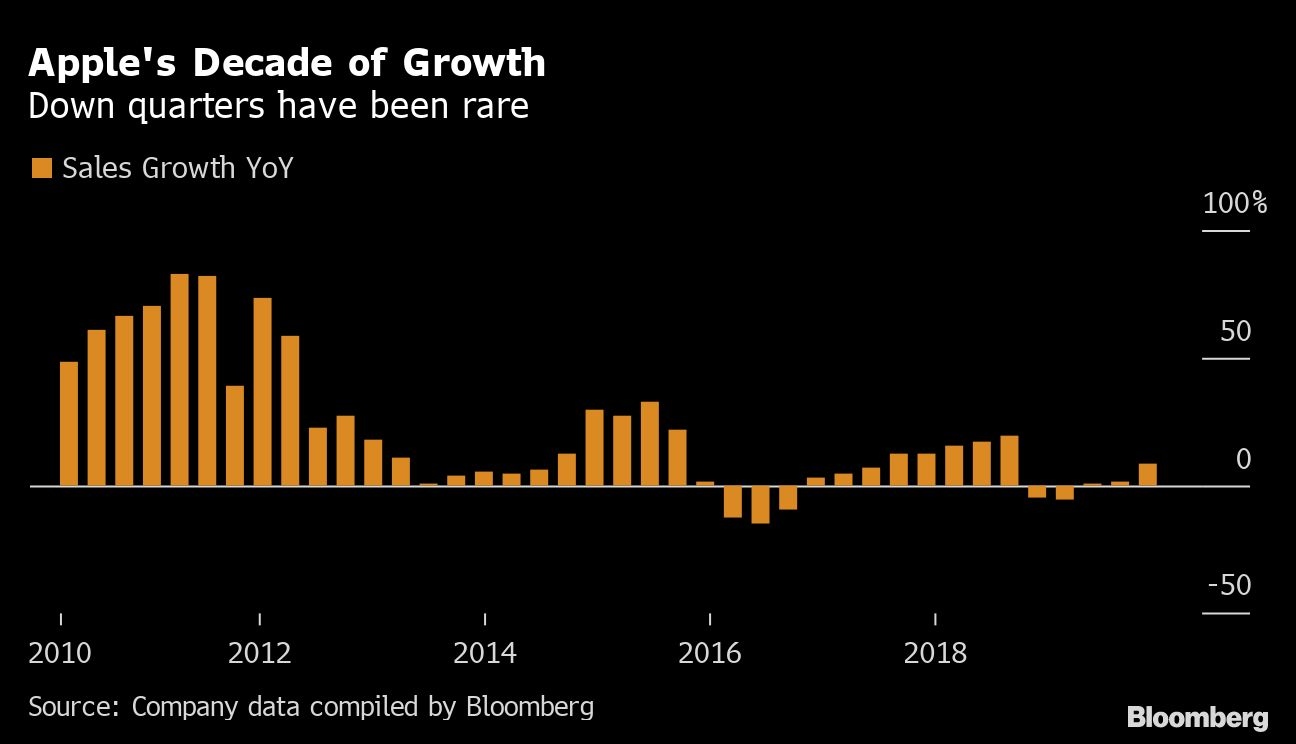 The Cupertino, California-based technology giant did not provide guidance for its June quarter due to the ongoing complications from COVID-19.

Apple has been uniquely impacted by the pandemic. In late January, many of its Asia-based suppliers and manufacturers ground to a halt as part of efforts to curb the spread of COVID-19. That resulted in shipping delays for devices and supply constraints. Around that time, it closed all 42 retail stores in China, a key source of revenue for the company, then shut its other retail locations. It’s still waiting to reopen most of them.

In January, the company had projected fiscal second quarter sales of between US$63 and US$67 billion, but it pulled the guidance in February as the pandemic starting spreading outside of China.

“We are proud of our Apple teams around the world and how resilient our business and financial performance has been during these challenging times,” said Luca Maestri, Apple’s chief financial officer. “Our active installed base of devices reached an all-time high in all of our geographic segments and all major product categories.”

“We are confident in our future and continue to make significant investments in all areas of our business,” he added.

Apple’s sales in China during the quarter dipped by about US$760 million, with increases reported in Europe and Asia Pacific outside of China. The company reported slight annual sales declines in the U.S. and Japan. It launched some new products in the quarter, including the new iPad Pro and a pair of Macs, but the iPhone SE’s debut was delayed about a month into the current quarter.

The virus is also impacting efforts to build future products. The company’s four upcoming redesigned iPhones with 5G will launch multiple weeks later than usual, but still by November, Bloomberg News has reported.

--With assistance from Emily Chang, Ian King and Candy Cheng.