Airpod and watches succeed Macbooks as top sellers for Apple

The results are a remarkable comeback from a year ago, when the most valuable technology company missed its own targets. A sales forecast for the current quarter also exceeded analysts’ projections, while services revenue came in slightly below expectations.

The shares, which have more than doubled over the past year, gained as much as three per cent to US$327.25 at 9:37 a.m. in New York. That’s the highest intraday valuation since the stock started trading in the 1980s, according to data compiled by Bloomberg.

“The strength is coming from the iPhone and continued really strong growth in wearables and the App Store,” said Shannon Cross of Cross Research. “The iPhone was very strong.”

The Cupertino, California-based company reported $91.8 billion in revenue for the fiscal first quarter, up nine per cent from a year earlier. Wall Street was looking for US$88.4 billion, according to data compiled by Bloomberg. Profit was US$4.99 a share, also beating analysts’ expectations.

For the fiscal second quarter, Apple said sales will be between US$63 billion and US$67 billion. Analysts estimated US$62.3 billion, on average. 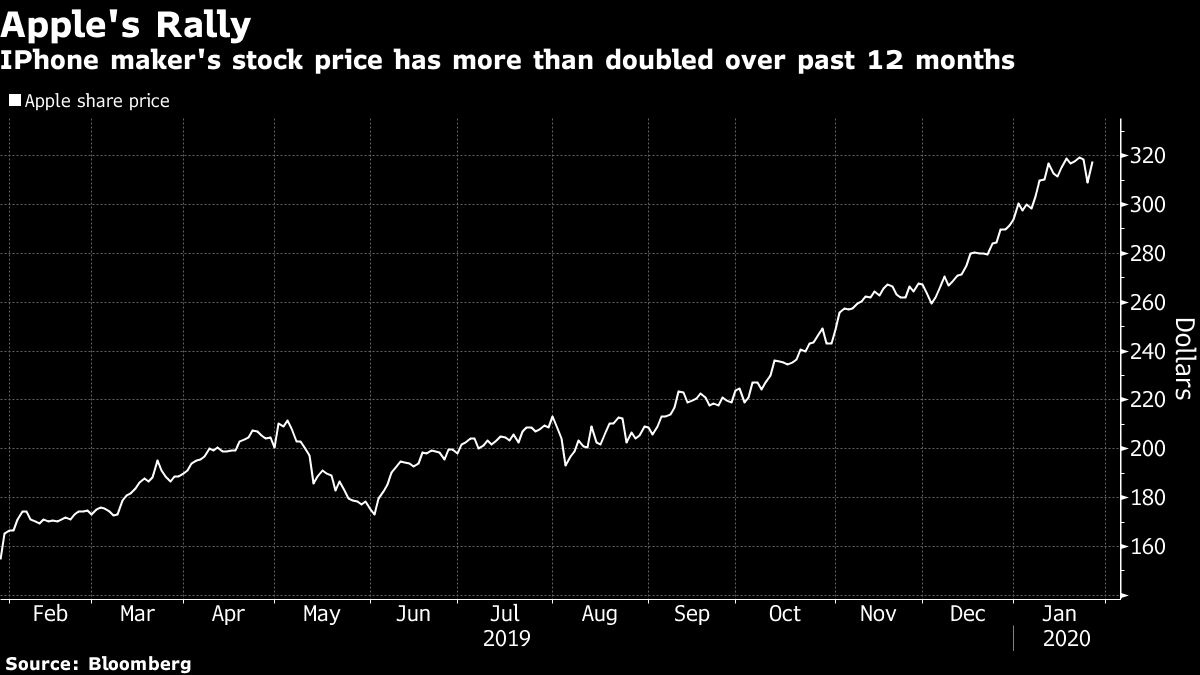 After years of rapid growth, Apple’s expansion has slowed as demand for smartphones waned and competition from Chinese rivals intensified. Under Chief Executive Officer Tim Cook, the company’s strategy has evolved. It now aims to sell new handsets to customers every three to five years, and then offer as many services and accessories as possible in the intervening years.

On Tuesday, Cook said Apple saw “strong demand” for the latest iPhones and noted that a base of more than 1.5 billion devices has been “a great driver of our growth across the board.”

Cook addressed the coronavirus during a conference call with analysts, saying Apple is following developments in China. The company is working closely with employees and partners in the region, he added. Virtually all iPhones are made by Foxconn’s Hon Hai Precision Industry Co. in Zhengzhou, China, and by Pegatron Corp. at an assembly site near Shanghai.

Chief Financial Officer Luca Maestri said the revenue range projected for the fiscal second quarter was wider than usual due to uncertainty created by the spread of the virus.

Analysts have been particularly excited about wearable accessories, such as the Apple Watch and AirPods.

However, the iPhone still generates the majority of Apple’s revenue. And this crucial business has improved from a dire performance in last year’s holiday period. The iPhone 11 and 11 Pro models were well received in their debut in the fall and demand in China has been particularly strong, outselling 2018’s releases in a market that has otherwise been shrinking.

Apple generated US$56 billion in revenue from the iPhone in the fiscal first quarter, up 8 per cent from a year earlier. That was a lot better than the 2018 holiday period, when sales of the handset dropped about 15 per cent. Apple cut the price of its entry-level flagship iPhone by US$50, luring buyers. There are also millions of older iPhones that are losing software support from the company, spurring new purchases.

Wearables, including AirPods, and other accessories generated $10 billion in revenue in the holiday quarter, up 37 per cent from a year ago.

The company reported Services revenue of US$12.7 billion, up 17 per cent from the same period last year. That missed analysts’ forecasts. This business still mostly relies on older offerings such as the App Store, iCloud storage and Apple Music. It’s unclear how well Apple TV+, the Apple Card and the Apple Arcade gaming subscription are performing, but there have been signs of weak demand for Apple News+, the company’s digital magazine subscription.

“One note of caution in an otherwise strong report was that Services, which included Apple TV+, grew slightly below expectations,” said EMarketer principal analyst Yoram Wurmser. “This miss could be attributed to the competition from Disney+, which launched at roughly the same time.”