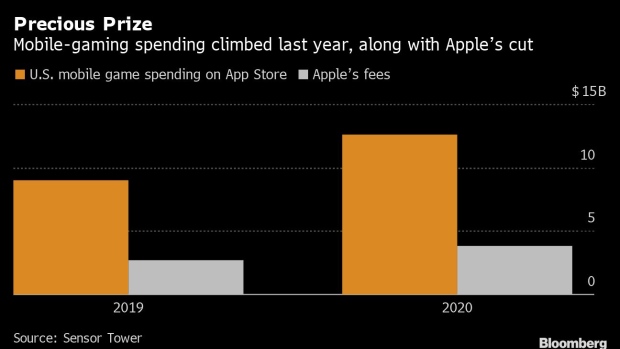 (Bloomberg) -- Apple Inc. has been ordered to make the most significant change to its App Store business model since launching the platform in 2008, and it could cost the tech giant a few billion dollars annually.

In a ruling Friday, U.S. District Judge Yvonne Gonzalez Rogers said the company must allow all developers to bypass its commission on in-app purchases -- a cut that runs as high as 30%. That includes letting iOS apps use “buttons, external links or other calls to action that direct customers to purchasing methods” other than Apple’s payment system.

It’s a blow to Apple, but one that the world’s most valuable company can likely absorb. And Apple dodged an even bigger risk -- that the judge might determine that it was a monopolist under either federal or state laws. That helped investors take the decision in stride: Though the shares fell as much as 3.5% just after the ruling hit, the stock pared the losses.

“The court has affirmed what we’ve known all along: The App Store is not in violation of antitrust law” and “success is not illegal,” Apple said in a statement. Kate Adams, the iPhone maker’s general counsel, called the ruling a “resounding victory” that “underscores the merit” of its business.

Apple’s adversary in the trial -- Epic Games Inc., the maker of Fortnite -- also contended that the judge sided with Apple. This “isn’t a win for developers or for consumers,” Epic Chief Executive Officer Tim Sweeney said on Twitter.

Apple’s commissions from the App Store generated an estimated $6.3 billion last year in the U.S. -- with most of it coming from in-app purchases and subscriptions. That money is what’s at stake as games and other apps prepare to steer consumers away from Apple’s payment system.

Earlier this month, Apple said it would allow developers of so-called reader apps to point users to outside purchasing methods. That category includes media services such as Netflix and Spotify, plus news and book apps. But the decision Friday means that rule will have to apply to games and other categories as well, which have historically generated much more revenue for Apple.

Apple said that it’s still too early to determine how or when exactly the changes will be implemented and that it needs to have conversations with the judge. It also said that it would engage in ongoing dialogue with developers about the changes.

Gaming apps account for about 70% of all App Store revenue, and that comes from less than 10% of the platform’s users, according to the ruling. Those big spenders make up for the more than 80% of App Store accounts that generate virtually no revenue.

Apple made about $3.8 billion in revenue from games in 2020, most of which came from in-app purchases, according to estimates from Sensor Tower.

But even if the ruling ends up costing Apple a few billion dollars a year, that’s still a small fraction of its total revenue. In fiscal 2021 alone, the company is estimated to bring in more than $360 billion, meaning the change won’t make or break its overall financial performance. Some developers may also choose to stick to Apple’s payment system so they don’t have to build their own web payment platform.

The judge also didn’t force Apple to change its fees or let third-party app stores on its platform, which would have been a far larger blow to Apple’s revenue.

The ruling states that Apple must let developers communicate with customers “through points of contact obtained voluntarily from customers through registration within the app.” Last month, as part of minor concessions designed to settle a class-action lawsuit with small developers in the U.S., Apple had already agreed to allow those direct communications between developers and end users.

The ruling in the Epic trial only applies to the U.S., while Apple’s previous App Store changes -- relating to communications and reader apps -- were designed to be global.

The ruling could ultimately mean Epic’s Fortnite comes back to the App Store. The game was originally removed last year for using its own payment method, bypassing Apple’s fees. Now that an injunction is in place for Apple to allow that approach in some form, Fortnite could be poised to return.

Sweeney said Friday that Epic would only restore Fortnite on the App Store “when and where Epic can offer in-app payment in fair competition with Apple in-app payment, passing along the savings to consumers.”

The ruling is believed to mean that users would be able to make purchases via the web, rather than having a competitng payment system in apps themselves. That means Epic would need to build a website to let users make purchases and include a link to that site in Fortnite in order to comply with the rules. That’s something Sweeney appears to be implying that Epic doesn’t want to do. Epic wants a built-in payment system, not the option to steer to the web.

In a briefing, Apple said that the reasons for banning Fortnite far eclipsed Epic’s decision to offer an alternative payment method and it’s unclear if Fortnite would return. It did, however, point to previous claims that it would allow Fortnite back if it returned to compliance with the App Store rules.

Sweeney said that Epic will continue “fighting for fair competition among in-app payment methods and app stores for a billion consumers.”

The ruling didn’t apply to the revenue that Apple previously lost from Epic bypassing its payment system. The judge ruled that Epic owes Apple $3.7 million for missed fees for Fortnite purchases made between August and October 2020. She also said Epic must pay Apple its 30% cut for purchases made between November 2020 and the ruling.

Apple has argued that its tight control of the App Store helps protect consumers and prevent developers from swindling users.

“We are still analyzing the decision, which is 180 pages long,” Apple’s Adams added, “but the headline is that Apple’s app store business model has been validated.”